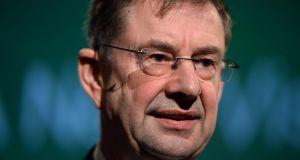 Fianna Fáil TD Eamon Ó Cuív: ‘I think when people abandon violence, we shouldn’t then accuse them of still being party to it.’ File image: Cyril Byrne / THE IRISH TIMES

Fianna Fáil TD Éamon Ó Cuív has said he believes Sinn Féin is no longer under the influence of the IRA.

What the report had stated was that some people were of the opinion that the IRA army council had oversight of Sinn Féin, Mr Ó Cuív pointed out.

“What that report says, basically, is that the IRA doesn’t exist, because there is no group that’s training, or buying arms, or involved in paramilitary activity... What the PSNI said is that other groups had told them that there was oversight, or that they were of the opinion there was oversight...

“It only includes a throwaway reference... that some group told the PSNI that they were of the opinion that there was oversight. The PSNI never said that there was, or that they had any proof of such. It’s very easy to say things like this. It’s based on hearsay.”

Mr Ó Cuív rejected the suggestion that he was at odds with the stance of his party leader Micheál Martin on this matter.

“We asked people to abandon violence and to go with politics, and we told them they’d then be accepted, and I think when people abandon violence, we shouldn’t then accuse them of still being party to it.”

Last week, Mr Martin said the issue of whether or not the IRA army council still oversaw Sinn Féin was not going to go away.

“No matter how hard Sinn Féin representatives try to spin in the media, and no matter how aggressively their trolls try to bully critics on social media, the inconvenient truth keeps popping up,” the Fianna Fáil leader tweeted.

In a speech to the Dáil, Mr Martin also condemned Sinn Féin’s “efforts to legitimise a murderous sectarian campaign”.

However, Mr Ó Cuív said: “I can tell you that the IRA that was involved with Sinn Féin is not functioning, if they were, the police would be doing their job and arresting and charging people for paramilitary activities, if such activity was underway.

Speaking to Tús Áite on Raidió na Gaeltachta, Mr Ó Cuív said that it was normal practice for political parties to have advisers, and to seek counsel, from outside their elected representatives, a practice employed by his own party Fianna Fáil.

“The question is, does Sinn Féin have advisers who are not on the ard chomhairle, and are not elected north or south of the border, and that’s likely. Most parties have that... including Fianna Fáil... people who have input, and influence party policies, it’s not unusual – and everyone knows who they are, they’re walking in and out of Stormont.”