Children not the target, tobacco companies tell TDs and Senators

Executives outline their opposition to plain packaging for tobacco products 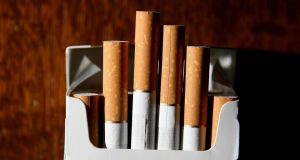 Representatives of three major tobacco companies in Ireland insisted at a parliamentary hearing yesterday that they never target children and would support any Government initiative to prevent more children from taking up smoking.

Senior executives from PJ Carroll and Co, John Player and JTI Ireland appeared before the Oireachtas Committee on Health to outline their opposition to proposed legislation to introduce plain packaging for tobacco products in Ireland.

Minister for Health James Reilly is bringing the Health Identifiers Bill 2013 on the grounds that branded cigarette products act as an inducement to children and teenagers to take up smoking. The Bill has won cross-party support. TDs and Senators from all parties at the hearing, as well as Senator Jillian van Turnhout (Independent), expressed support for the Bill.

Steven Donaldson of PJ Carroll said the legislation was disproportionate and would not reduce smoking or stop children taking up smoking. He said it would help the criminal black market. To introduce it would also deny his company of a legitimately held trademark.

Similar arguments were made by the other two companies. Andrew Meagher of John Player told the committee that the Irish tobacco control model had failed, citing OECD figures that showed the percentage of smokers among adults remaining static at 29 per cent between 2006 and 2013. He said what was proposed was “more of the same” and would not have the desired impact. He also argued it would lead to a greater share for the smuggled cigarette market. He and colleague Axel Gietz also argued the company would be entitled to seek compensation for the loss of its intellectual property rights.

John Freda of JTI contended that plain packaging would damage competition, infringe rights and freedom, raise barriers to trade and would result in a loss of jobs.

He said companies relied on brands to compete with other products available to adult smokers who knew the risks of smoking and want to smoke. “I want to stress at this point that we do not target children,” he said. “A key challenge is to make sure that children can’t access tobacco products.”

Committee members were sceptical of the claim that children were not targeted and also queried the statistics citing Irish figures showing lower smoking rates.

Law Society president John Shaw and its director general Ken Murphy also appeared before the committee to outline its opposition to the measure.

Ms van Turnhout said the declaration of interest provided by the society was “opaque”. “What I have seen throughout the hearings is the tentacles of the tobacco industry are everywhere. We are getting the same sentences again and again. I want to be sure of their true impartiality,” she said.

Billy Kelleher of Fianna Fáil asked why the Law Society’s submission had not referred to the constitutional obligation to ensure the wellbeing of citizens.

Mr Shaw said the intellectual property committee – and by extension the submission – had no regard whatsoever for the tobacco industry and its members had an expertise in that area of law.

Mr Murphy said intellectual property rights should not be passed over by overwhelming consideration of the health committee for health issues.

“Somehow or other we were being lumped together or seen as apologists or Trojan horses for the industry. We are simply here because there are issues to do with IP [intellectual property] law. IP is important for Ireland Inc. It would be similar if it was in relation to foodstuff or alcohol or tobacco.”

The Irish Cancer Society also criticised the Law Society submission. Its head of advocacy Kathleen O’Meara questioned why it was representing “only one side of the argument”. “The Constitution recognises that property rights have to be balanced with the social good, such as public health,” she said.