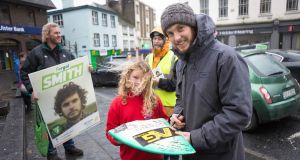 Green Party candidate Fergal Smith signs a piece of one of his broken surfboards for Finn Curran (7) while canvassing in Ennis, Co Clare. Photograph: Eamon Ward

“It’s not about building defences. That’s not a real solution. It is flooding” says Fergal Smith, scandalised by the fact that after another winter that left huge swathes of the west of Ireland under water, the issue has been absent from the conversation in this election. “Flooding. So where is it coming from? Why is it happening? How are we going to solve it?”

Smith is fighting his first campaign, having made a late decision to represent the Green Party in Co Clare. On a misty Friday in Scariff, he stands with two huge posters under his arm. They cost €6 apiece to print, which he has paid from his own pocket.

If the archetypal Irish politician-in-election-mode is of a whirling dervish of handshakes, bad haircuts, faux-sincerity and paisley ties, then Smith is the true alternative: slender, photogenic, slightly beatnik and burningly sincere in his message.

He is hugely concerned the ecosystem, locally and nationally, is on the verge of being irretrievably screwed, and he is passionate about arresting that.

He knows the Green Party as an entity is prone to easy dismissal. He showed up at the mart in Ennis recently to hand out flyers, and made the mistake of going by himself. “What would the f****n’ Greens know?” growled one person. “Take that flyer and stuff it up your . . .” said another.

“What we are being fed by the IFA and Teagasc is leading us down the wrong path,” he tells Fionnuala Collins.

“I’m meeting farmers and they are telling me that they are saying to their children: whatever you do don’t get into farming. Sell it and get out. And I think that is the thought among small and medium farmers, because they are getting squeezed so tight on their margins and are so stressed. One explained it very well to me. In 1967, they sold five cows and bought a brand new car. Now, the equivalent would be an artic’ and a half of cows. They have upped everything to the point where the land is at crisis point.”

The co-op cafe, has been a gathering point for 29 years, is crowded this lunchtime – in stark contrast to Scariff’s main street. A garden at the back provides food for the cafe. Several businesses started here – a flower shop, a wholefood shop, East Clare Accessible Transport, which became Clare Bus.

Fionnuala Collins, co-ordinator at the co-op, was raised in Birmingham by Irish parents and moved to Clare in the 1990s. She will vote for Smith because they share the same worldview: “That we can be global citizens rather than just trying to feather our own nests.”

Smith believes the co-op is an obvious model for success which could be repeated in towns across Ireland. Later he visits the Irish Seed Savers Association in Capparoe, an enterprise which literally saves and nurtures endangered vegetable varieties. “No politicians have called to my door. But I do live up a mountain,” laughs Marianne Cronin of Seedsavers when asked about the election. “I think employment is the big thing. As it is, we are probably one of the biggest employers in the area.”

Smith is battling in a fascinating constituency. It is safe to say he is alone among the candidates in declaring Seedsavers to be “the most important building in Ireland”.

Sinn Féin’s Noeleen Moran is forecast to be the party’s first candidate to win a seat in Clare since Eamon de Valera won a byelection here in 1917.

Smith is polling at 3.68 per cent in first preference votes. Unknown in politics, he has an international reputation as a fearless and judicious big-wave surfer, one of a handful of surfers capable of gliding through the most murderous waves on the planet.

The past few weeks have given him a close-up understanding of how the mechanics of big-party campaigning works. “And it becomes kind of disgusting, the money behind them.”

While he likes them the main party candidates on a personal level, he is baffled by their vision for the country – and by the avoidance of the fact that the world is, you know, melting. “They are just a bit lost, I feel. They have just been fed a story of how things work.”

Plenty of people have told him that he “hasn’t a hope”, but he believes he has persuaded people to change their mind about the Green message. He shrugs when asked about the recent poll in the Champion.

“No idea. I haven’t even looked. I’m a newbie at all this but I just want to get my message out to as many people as possible. If you vote for the same vision, then you’re going to get more of the same.