Fianna Fáil and Fine Gael claim two seats each, and Sinn Féin gets one

Sinn Féın candidate Kathleen Funchion and John Paul Phelan of Fine Gael celebrate with their supporters as they both secure a seat in Carlow-Kilkenny. Video: Colm Keena 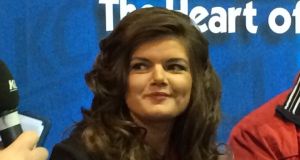 Kathleen Funchion (Sinn Féin) was elected in Carlow-Kilkenny with alongside two TDs from both Fianna Fáil and Fine Gael. Photograph: Colm Keena.

The Carlow Kilkenny count finished with a dramatic last-minute turnaround that saw Fianna Fáil and Fine Gael claim two seats each, and Sinn Féin one.

During much of the count it had appeared that Fianna Fáil would win three seats and Jennifer Murnane O’Connor (FF) arrived in the count centre to hugs and cheers only to see weak transfers to the Carlow-based candidate causing her party’s dream of three-seats turn to ashes.

John McGuinness (FF) was the poll-topper and was elected on the fifth count. Kathleen Funchion (SF) and John Paul Phelan (FG) were elected on the tenth count, and on the distribution of his surplus Bobby Aylward (FF) and Pat Deering (FG) were deemed elected having not reached the quota.

Carlow-based Deering came surging from behind to pass out Murnane-O’Connor during the surplus distribution, having sat in the centre looking dejected for most of the day.

Labour junior minister Ann Phelan never looked in the running and did not attend the count centre. The count was completed by midnight.

Speaking to The Irish Times after his election, Mr Phelan said the people have voted against Fine Gael and Labour and it was up to Fianna Fáil, Sinn Féin, and the Independents to now form a government.

There was no appetite in Fine Gael for going into government with Fianna Fáil, he said, adding that he was basing his view on talks he had during the day with fellow party members, including ministers.

Mr Phelan said Fine Gael had lost the election campaign because it had run a “badly organised and badly managed” campaign.

This was not Enda Kenny’s fault, he said, as he had not crafted the campaign message. However, he agreed that as party leader, the Taoiseach was responsible “for appointing some people to some positions”.

The Fine Gael message did well in south Dublin, but not in rural Ireland, he added.

1 The view from Clondalkin: If Sinn Féin don’t get in, ‘there will be marches’
2 Coronavirus in Europe: Two dead in Italy as fears grow that attempts to contain illness are failing
3 Ryanair’s Michael O’Leary under fire for comments on Muslim men
4 Lithuanian man given until midnight on Saturday to leave Ireland
5 Founder of disabilities network with Irish centres sexually abused six women
Real news has value SUBSCRIBE