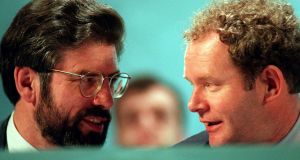 The head of the Catholic Church in Ireland Cardinal Cahal Daly expressed concern to UK officials a quarter of a century ago that Gerry Adams had become perceived as “the voice of nationalism”.

“This was very far from the truth,” the cardinal said in confidential talks with the Northern Ireland Office on the eve of the IRA ceasefire in 1994, according to newly declassified records.

Daly also told then Northern Ireland minister of state, Michael Ancram, that an internal settlement for the North would be “unacceptable”.

A briefing paper in the files released in Belfast this week profiles the Co Antrim-born primate, who died in 2009. It was suggested that he had had an important role in drafting Pope John Paul II’s speeches during his Irish visit in 1979.

The cardinal, the memo noted, “speaks frequently and strongly against IRA violence and had referred to the IRA as a movement ‘alien to Irish traditions and Irish values’.”

He was described as “a kindly man” but he had a strong commitment to traditional Catholic values, which had led him to oppose integrated education.

On June 1st 1994, Daly met Ancram in Armagh. Daly opened the discussion by saying how pleased he was with the British government’s response to Sinn Féin’s demands for “clarification” of the Downing Street Declaration of December 1993.

In Daly’s view, the response “left Sinn Féin/IRA without any possible reason (not that there ever was one) to persist with a campaign of violence”.

The cardinal said great credit was due to the Ulster Unionist leader Jim Molyneaux in keeping his party together in face of “the tactics deployed by Dr Paisley”. Daly “he was most vexed that Gerry Adams was seen by many as the voice of nationalism – this was very far from the truth”, the memo continued.

On the issue of “parity of esteem”, Ancram sought the cardinal’s view as to what this meant.

The cardinal stressed that cross-border institutions would have “considerable symbolic importance” for nationalists.

Small gestures such as British ministers attending the 1993 GAA final in Dublin had been greatly appreciated by Northern nationalists. The nationalist community also regarded the British government’s Irish language policy as important since Irish “was regarded as a badge of identity by nationalists”.

In a letter in September 1990, Daly wrote: “My regret is that the withdrawal of funding from this group has provided Sinn Féin ... with a propaganda opportunity at a time when their credibility was at a low ebb ...”

The bishop had ascertained from local priests that Glór na nGael in west Belfast had taken steps “to purge itself of members or influences ... with Sinn Féin or paramilitary associations”. The organisation, he added, had been founded by Cumann na Sagart, a highly respected organisation of Irish-speaking priests.

Daly was joined by the Irish government, various public figures and Protestant devotees of the Irish language in Northern Ireland in protesting against the funding withdrawal.

The files reflect a change in the attitude of the British government to Glór na nGael by 1994 as the peace process beckoned. When the organisation’s chair applied for funding for a project officer in July 1994, the official advice was that the organisation should be treated as any other applicant for funding.