Campaign a final sprint by parties to convince undecided voters 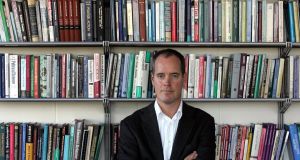 This article is part of The Irish Times Meet the Voters series, profiling ten sample voters in a bid to track the impact of the 2016 General Election campaign on their voting intentions.

With just over two weeks to polling day around 30 per cent the electorate has yet to finally decide how they will vote, according to Michael Marsh, Emeritus Professor of politics at Trinity College Dublin.

He said a quarter of voters remained undecided and within the support for each party or grouping there was 2-3 per cent of the vote which was “soft” and subject to change during the campaign, he said.

He said while previous elections had not shown big net shifts in voter intentions during a campaign “even if only 5 per cent change their minds, that is enough” in the context of the current levels of party support.

“If they leave the government parties then it is all in play. If they go Labour and FG then the current pairing is almost there”.

He described the typical Irish voter as centre right and said it was interesting almost all parties, including Fine Gael to some degree, were campaigning on the centre left.

“Across Europe the political discourse is right versus left, tax cuts versus spending. Those sorts of ideological discussions do not apply to the Irish voter although commentators love them, partlybecause we have not really had parties of the left.”

“Even when Labour is in government it is in coalition with the centre right. We should be able to predict how the Irish voter will vote if we know their views on right-left attitudes but we cannot.”

Mr Marsh said many voters will not properly “tune in” to the campaign until shortly before polling day.

“Unfortunately we don’t have research that allows us to track this in an Irish context but studies in the US showed that in the closing weeks voters were more likely to vote the way researchers think they should, and perhaps along the lines of their social group and traditional partisanship . So the campaign brings people to where they should have been in the first place.”

“The most recent opinion polls suggest there is a lot to play for over this campaign. There appear to be two competing forces at play, one is the desire for stability and on the other side is a high proportion of voters appear to be willing to countenance a change in government if it will bring more equality.”

Mr Farrell said the 2011 campaign differed from previous elections in that a party’s policy platform appeared to matter more than loyalty to an individual candidate.

“There are a number of reasons for this. In 2011 we began to see a socio-economic voting behaviour such as we have not really seen before . Younger working class voters were more interested in parties to the left and so on”.

Mr Farrell said the Irish electorate remained conservative and in 2011 shifted more to the right.

“On this basis it would appear the gap in the Irish political market at the moment is on the right, although Renua has not as yet capitalised on this.”

While opinion polls take snap shot of support, gauging the extent to which voters shift allegiance between parties is more difficult and, at the moment, can only be examined in post-election studies.

Mr Farrell said this “seems to support the contention that we all know anecdotally: that there is a very small difference between these parties and there seems to be little merit in them remaining separate.”

Analysing the vote-getting potential of Independents or micro-parties is fraught, according to Mr Farrell, because they are such an amorphous mass.

“I would have thought, given the extent of the vacuum at the moment, with a FG-led coalition the most likely scenario because Fianna Fáil have ruled out everyone, there is still scope for Independents to do well. This is not the election from them to go down.”

Seán Dorgan, Fianna Fáil general secretary, stressed that “campaigns matter”. He said with around 30 per cent of voters yet to decide how to cast their ballot the weeks before polling day were a chance for parties to put out alternative policies.

He said there was a lot of volatility amongst the electorate and that it would be wrong to assume the campaign was homogenous. “There are 40 constituency battles and each one has its own features and dynamic.”

Mr Dogan said parties were trying to retain and energise their core supporters while at the same time trying to reach out to the undecideds. “You cannot do one at the expense of the other”.

There was not a limited evidence of significant swings in voter intentions prior to voting, he said.

“In 2002 the Progressive Democrats had a late bounce in support and in 2007 Fianna Fáil seemed to pick up a couple of points towards the end.

There is often a mood at the end a campaign, perhaps a concern around an overall majority, that can be worth a few percentage points.”

“There is definitely an undecided vote but we don’t have longitudinal data on voters because we do not track voters over months and years.”

Mr Loscher said during most campaigns there was a core vote for each party or grouping which was “locked in” leaving a few percentage points for each party to potentially gain or lose.

“Based on a rough assessment of the current data approximately 75 per cent of voters are fairly fixed in terms of who they plan to vote for. And even the remainder, the so-called floating voters, have existing loyalties.

“The simple maths of it means there is not a massive amount to be won over the last few weeks of a campaign. But a shift of a few percentage points can lead to very different outcomes.”

The Irish Times has created a panel of ten sample voters in a bid to track the impact of the election campaign on their voting intentions.

Each member of the panel is broadly representative of a significant subsection of voters including: a pensioner, a student, a non-Irish national, a high earner, a member of the squeezed middle, a fisherman, a single parent, a small business owner, someone dependent on the health services, and someone who is out of work.

Each participant has set out their circumstances and identified the issues that are important to them. Four are still undecided about who they will give their number one preference to come February 26th. Three said they plan to vote for a Fine Gael candidate, and two for Sinn Féin.

We will return to the panel twice during the campaign to ask whether anything they have seen or heard has persuaded them to change how the plan to vote.

Once the new government is formed we will speak with them a final time to ask whether they are happy with the outcome.