Call to halt referendum on lowering age of presidential candidates

Presidents should not have to swear religious oath, says group on separating church and State 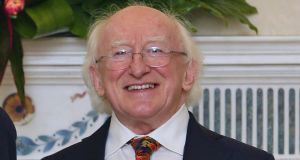 President Michael D Higgins: the Citizens to Separate Church and State group says the referendum on reducing the age of presidential candidates should be stopped until the requirement for presidents to swear a religious oath on entering office is removed. Photograph: Colin Keegan, Collins Dublin.

The referendum on reducing the age of presidential candidates should be stopped until the requirement for presidents to swear a religious oath on entering office is removed, says a new group.

Citizens to Separate Church and State says the oath should be accompanied by an alternative “affirmation” for use by non-religious people.

“We are at a loss to understand why the Government is not addressing the human-rights abnegation occasioned by the continuance of the discriminatory religious oath for holding high office,” spokesman Dr Mike McKillen said.

Passing the referendum would extend the “discriminatory” oath “to a new cohort”, he said.

Mr McKillen stressed he had no difficulty with lowering the age for presidential candidates from 35 to 21.

“We call on political parties and individual TDs to ensure that the Bill is stopped in committee and the Government requested to think again about its failure to do the right thing.”