Panel of three doctors likely to be approved in legislation 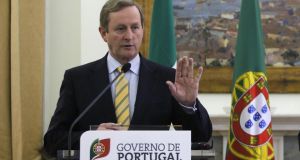 The Cabinet is expected to agree today on a legal framework for abortion in defined circumstances where a woman’s life is in danger, including the threat of suicide.

Taoiseach Enda Kenny yesterday rejected the argument of his predecessor John Bruton that the threat of suicide should not be covered by the legislation, saying he did not have the comfort of picking what parts of the Constitution he was going to deal with.

Final agreement between Fine Gael and Labour on the heads of the Protection of Maternal Life Bill 2013 was reported to be close last night after protracted negotiations on the number of doctors that will be involved in making a decision on a suicide threat.

Government sources said that barring any unexpected last minute hitches, both Coalition partners were now confident the heads of the Bill could be approved by Government this morning and published either later today or early tomorrow.

The breakthrough follows intensive discussions between both parties that continued over the weekend and culminated with a meeting late yesterday evening between the group of four Ministers who finalised the text of the legislation. Minister for Health James Reilly, the two Labour junior Ministers in his department Kathleen Lynch and Alex White, and Minister for Children Frances Fitzgerald are expected to meet again this morning for a final discussion before the memo is brought to Cabinet.

Risk of suicide
The number of doctors who will assess the risk of suicide will be less than the six experts that featured in earlier speculation. It is expected that an initial decision in the case of a suicide threat will be made by a panel of three doctors with the right of appeal after that involving other medical experts.

Abortion controversy
Mr Kenny, who was in Lisbon yesterday for talks with Portuguese prime minister Pedro Passos Coelho, was questioned about Mr Burton’s intervention for the second time in the abortion controversy.

Saying he did not want to comment on any individuals he said: “People should wait and see what the heads of the Bill actually mean and what they say before that goes to the committee for full, comprehensive discussion and analysis.

Tánaiste Eamon Gilmore also said the Cabinet would sign off on the legislation today. He said the secret recording of two Labour TDs speaking about Labour having a strategy to seek the gradual liberalisation of abortion law would have no bearing on the Government’s attitude to the X case legislation.

Within Fine Gael Mr Bruton’s claims have added to the increasingly fractious nature of the debate over imminent legislation on the issue.