Commissioner criticised for not informing office about irregularities at Templemore 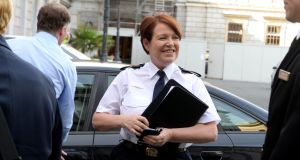 The Comptroller and Auditor General (C&AG) has criticised Garda Commissioner Nóirín O’Sullivan for failing to inform his office of financial irregularities at Templemore Garda College.

Séamus McCarthy said he expected to be informed of the existence of issues in July 2015 when Ms O’Sullivan first learned of the difficulties. His office was not notified until August 2016.

Ms O’Sullivan told the Public Accounts Committee (PAC) she became aware of the issues on July 27th, 2015, after a meeting with head of human resources in the Garda, John Barrett, in Templemore college.

Four days later, on July 31st, she wrote to the C&AG with details of the Garda financial accounts but made no reference to the allegations of financial mismanagement at the Garda College.

Ms O’Sullivan said she was not in receipt of all of the facts at that time and did not believe it was appropriate to make Mr McCarthy aware of partial information.

The Commissioner told the committee she would have acted differently if she knew then what she knows now.

Ms O’Sullivan said: “I do not accept I knowingly misled the C&AG. Nobody brought to my attention anything we should alert the C&AG to.

“I knew issues had been identified in the Garda College that had to be addressed.”

The C&AG told the committee it was a judgment call for the accounting officer as to whether his office should be involved.

However he stressed he believed in the principle of reporting significant issues when they arise.

Mr McCarthy said he was “quite clear” it should have been brought to his attention in 2015.

The commissioner faced seven hours of questioning on her knowledge of the financial mismanagement at Templemore. An interim audit released in March 2017 outlined the existence of 50 bank accounts, and taxpayers’ money being used to fit privately owned shops.

Ms O’Sullivan’s knowledge of events has been contradicted by a number of individuals including Mr Barrett and head of legal affairs in the Garda Ken Ruane.

Ms O’Sullivan insisted July 27th, 2015, was the first she was aware of the allegations and she acted promptly on receipt of the information.

The commissioner was also questioned by the committee about disputes between civilian members of the force.

Ms O’Sullivan was asked about a letter sent to her from director of finance Michael Culhane in October 2015 requesting she take action against Mr Barrett after he raised issues surrounding Templemore. Mr Culhane had said Mr Barrett should be investigated under the Official Secrets Act for sending documentation to his home address.

The commissioner stressed the language contained in the letter was not appropriate but insisted no investigation was ever launched into Mr Barrett.

Asked about the dispute between the two civilian members of the force, Ms O’Sullivan said this was an interpersonal disagreement between two individuals.

On receipt of that letter in October 2015, the commissioner asked the then chief administrative officer Cyril Dunne to intervene.

Ms O’Sullivan said: “Mr Dunne also asked Mr Culhane if he wished to pursue this matter further, which at that time he did not. Mr Dunne also gave advice to Mr Barrett, which I think was quite appropriate.

“Mr Barrett was relatively new to the organisation and may not have fully understood the consequences of sending documents off-site, so to speak. Mr Dunne also gave Mr Barrett some advice in relation to managing his documents and his files in a more secure manner.”

The committee also heard the force is engaged in ongoing discussions with Revenue about its tax compliance.

The Garda Síochána has five tax numbers but one of those has not received a tax clearance certificate.

The commissioner said the chief administrative officer, Joseph Nugent, would keep the committee informed of these negotiations.