Byelections expected to be held in late September 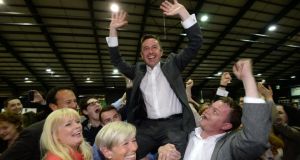 The election of Brian Hayes as an MEP has led to an autumn byelection in Dublin South West.Photograph: Dara Mac Dónaill

The reshuffled Government’s first electoral test is expected to come in the autumn in a number of byelections.

Voters will be scheduled to go to the polls in at least two constituencies following the election of former Fine Gael minister of state for finance Brian Hayes (Dublin South West) and Independent Luke “Ming’’ Flanagan, (Roscommon-South Leitrim) to the European parliament in May.

A third byelection seems likely given the virtual certainty that Minister for the Environment and Carlow-Kilkenny Fine Gael TD Phil Hogan will be appointed as Ireland’s next EU commissioner this week.

“Late September would be comfortably within the six-month period allowed for the byelections and, more importantly, it would be before the October budget, which, despite positive economic predictions, will inevitably contain an element of pain,’’ said a Government source.

Dublin South West is a four-seater. The sitting TDs are Minister for Communications Pat Rabbitte and Eamonn Maloney of the Labour Party and Sinn Féin’s Sean Crowe.

Labour was the big winner in the general election, securing over 36 per cent of the first preference vote.

Roscommon South Leitrim is a three-seater, with sitting TDs Frank Feighan of Fine Gael and Independent Denis Naughten, who broke with the party in a row over facilities at Roscommon hospital.

Both constituencies could figure in this week’s ministerial shake-up.

There is speculation that Mr Rabbitte could lose his ministerial post and that Mr Feighan could be appointed as a minister of state.