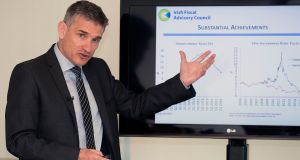 Prof John McHale, chairman of the Fiscal Advisory Council, the State’s budget watchdog, has warned the Government against using any mechanisms for increasing public spending beyond what is already committed to in the budget plans. Photograph: Dave Meehan/The Irish Times.

The Fiscal Advisory Council, the State’s budget watchdog, has warned the Government against using any mechanisms for increasing public spending beyond what is already committed to in the budget plans.

Council chairman Prof John McHale told the Oireachtas budget committee on Tuesday that he was worried the Government might repeat last year’s move, when it effectively doubled the size of the giveaway by passing more than €1.5 billion of supplementary estimates for 2015 after the October budget.

Supplementary estimates are passed by the Dáil to authorise bailouts for overspending departments - most often the Department of Health - and to pay for new spending programmes the Government has approved outside the budget.

Once passed the supplementary estimates increase the following year’s budget, as they are automatically included in the “base”.

Prof McHale said any repeat of last year’s pre-election budget would be judged by the Fiscal Adisory Council to be outside the limits of what was considered prudent.

Last year, the supplementary estimates were used as a backdoor route to increasing spending in an election year, as it did not breach EU rules. Ministers have said no supplementary allocations are possible this year, but some sources say EU rules on this are open to interpretation.

In July, the Government allocated a revised estimate for the Department of Health for this year, providing an extra €500 million. However, Ministers say that there will be no further allocations at the end of this year.

Prof McHale said that with already committed increases to account for demographics and public sector pay increases (€900 million), along with €540 million of extra spending announced in June (mostly for the Department of Health to account for overspending), the real size of the budget package will be €2.4 billion, rather than the €1 billion promised by Minister for Finance Michael Noonan.

He said this was still “prudent” but was “at the limit of the range of prudent policies”.

Prof McHale and representatives from the council were in Leinster House to meet the new Budget Scrutiny Committee, which is holding hearings before the budget is announced. The committee will produce a report on budget options for the Government at the end of this month.

Mr Noonan and Minister for Public Expenditure Paschal Donohoe will bring a memorandum on the budget process to the Cabinet on Wednesday which is understood to caution Ministers that many of their requests for budget increases are unrealistic.

The two Ministers confirmed at the Fine Gael think-in in Kildare that the ceilings for the October budget would not move from the figure set out in the Government’s summer economic statement.

The Government will have a little under €1 billion of fiscal space to allocate between tax cuts and spending increases.

In accordance with the programme for Government, the split will be 2:1 in favour of spending increases. Mr Noonan indicated that this meant that tax cuts would be limited. However, with just over €600 million remaining for budget day spending increases, many Ministers will see their requests for additional resources refused.

Mr Noonan and Mr Donohoe are likely to urge ministers to manage the expectations of their departments and their stakeholders in the run-in to the budget, which will be announced on October 11th.