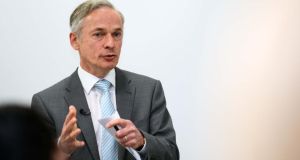 Fine Gael TD Richard Bruton has been named the Party’s director of elections for the referendum on the abolition of the Seanad. Photograph: Eric Luke/The Irish Times

Fine Gael’s Richard Bruton has been named the party’s director of elections for the referendum on the abolition of the Seanad, leading its campaign for a Yes vote.

The Minister for Jobs, Enterprise and Innovation would give people the “full facts” as to why the Seanad “is no longer an effective or appropriate part of Irish political life”, Taoiseach Enda Kenny said today.

Mr Kenny said the Government was “looking to deliver the biggest reform of politics in the history of this State” as part of its agenda to “programme to radically reform public services”.

The questions people would have to answer were simple, Mr Bruton said. “Do they want fewer national politicians? Do they want a national parliament that costs €20 million less per year to run?” he asked. “I strongly believe that we in the political system need to be more efficient and prudent, at a time when families and workers across the country are being asked to do the same.

“We should vote yes for fewer politicians and yes for a less costly but more effective political system,” he said.

The 32nd proposed amendment to the 1937 Constitution and will propose to abolish Seanad Éireann.

The referendum is likely to be held in early October before Budget 2014.