State papers 1986: Regiment had become symbol of sectarian division and ‘hated’ by Catholics 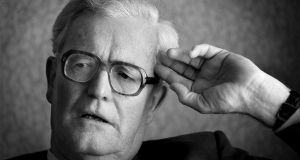 The image and activities of the Ulster Defence Regiment proved an increasingly embarrassing issue for the British government in the run-up to and after the signing of the Anglo-Irish Agreement in 1985.

This is disclosed in previously confidential files on the controversial regiment just released by the Public Record in Belfast under the 30/20 year rule.

The UDR’s credibility was first raised by the secretary of state Douglas Hurd, who requested “an in-house discussion with Ministers about the UDR” in November 1984.

In anticipation, P W J Buxton, a Northern Ireland Office (NIO) official, produced a “sensitive” memo on the regiment, formed in 1970 to replace the former B Specials. Buxton noted it was intended to supplement the regular security forces by static guard duties and checkpoints but was not intended for crowd control or riot duties.

By 1972, there were 10 battalions and more than 9,000 men. In the early days, he said, a quarter of the men were Catholics (unlike the sectarian-based Ulster Special Constabulary). “But murder and intimidation, together with a growing perception in the minority that the British Army, which had come to protect the Nationalist community, was becoming arrayed against it . . . brought this figure down to about 2 per cent.”

The perception, he said, “was unfair . . . but it reflected a truth – that the bulk of its members were strongly anti-Nationalist, some of them ex-B Specials”.

By the 1980s, the UDR had dropped to 6,600 with a permanent cadre of 2,650. It was commanded by a brigadier of the regular army and had a role in 85 per cent of Northern Ireland with the exception of the Catholic parts of Belfast, Derry, south Armagh and parts of Fermanagh.

Turning to attitudes towards the regiment, Buxton admitted the UDR had become a symbol of sectarian division, though any hint it did not have a lasting role would be regarded with “horror” by Unionists. “By contrast,” he told the secretary of state, “the regiment is mistrusted, even hated, in much of the Catholic community and by many Catholic politicians. Their attitude has been confirmed in the past year by the charging of several members with murder; in the case of two men from 2UDR in Armagh, allegedly committed while on duty.”

And Southern politicians, he added, “who do not have too many good words for the RUC, naturally abominate the UD”, while, more significantly, the regiment “is not held in the highest esteem by the RUC (including the Chief Constable [Sir Jack Hermon] who has spoken publicly of its ultimate demise) . . .”

A military assessment in 1981 had concluded there was no long-term requirement for the UDR though it might have a role in home defence. In light of that “the UDR must . . . be reduced substantially” though “political sensitivities” meant “this long-term view of the Regiment’s future must be kept secret”.

Hurd’s request prompted a response by the NIO minister and ex-Guards officer Lord ‘Charlie’ Lyell, who wrote he believed “much of the Catholic population, who had a long-standing grudge against the B Specials” originally saw the UDR “as an opportunity for a non-sectarian force”. However, “this hope was soon dashed due to the fact that many of the dreaded B Specials joined . . . and secondly, by the intimidation of Catholics”.

While Nationalists favoured disbanding the force, “the resulting backlash from the Unionist quarter makes this an unlikely proposition”. Many Protestants regarded the disbandment of the B Specials in 1970 as “an act of treachery by the British government”. “Disbandment . . . would be seen by Unionists as once again leaving the hard-pressed Protestant people undefended” while prompting the creation of new Unionist paramilitary groups. Besides, he felt, “there will always be an element within the Nationalist movement determined to find bogeymen”.

For his part, the minister of state, Nicholas Scott, in a memo dated January 18th, 1985, saw a home defence role as the long-term outlook for the UDR. He felt local UDR commanders believed they were “a source of irreplaceable intelligence on Republicans”. This view, however, was not shared by the intelligence section of the RUC or British Army. “It is not contested that the UDR know, or think they know, who all the local Republicans are, but this is a large part of the problem of the UDR.”

The UDR’s sectarian image received corroboration from an unlikely source in February 1985 when the Ulster Unionist leader James Molyneaux privately informed J A Daniell, an NIO official, of his “concern about the way in which some UDR patrols abused their position in relation to members of the Catholic community”. RUC contacts, the official noted, were also concerned, while “the vetting of recruits left much to be desired”. He felt Douglas Hurd might express interest in the vetting issue.