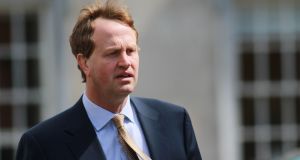 Nobody in Government has warned the British authorities that they are in breach of their international obligations in relation to the Belfast Agreement, the Dáil has heard.

Fianna Fáil justice spokesman Jim O’Callaghan said Ireland did not amend Articles Two and Three of the Constitution to allow “some ambiguous unknown British Bill of Rights” replace the European Convention on Human Rights Act as it operates in Northern Ireland.

He sharply criticised Britain’s preparation for Brexit as “abysmal” and warned that the British population was being guided through an enormous crisis “by inexperienced politicians whose compasses are set not by the interests of the British people but by feelings of emotion and English nationalism”.

He also said Ireland was “grossly unprepared” for Britain’s departure and he criticised the budget which was “completely inadequate in seeking to deal with the threat posed to this country by Brexit”.

Speaking during a late night debate on Budget 2017, Mr O’Callaghan warned of the constitutional as well as economic consequences of Brexit for Ireland.

Highlighting the vote in Northern Ireland to remain, he said the Government needed to “carefully nourish” the recognition by unionists for the first time that their interests are best served, not by being part of the UK, but by being part of a federal European system.

Mr O’Callaghan, a barrister and Fianna Fáil’s legal adviser, pointed to the vote by the vast majority of people in 1998 to amend Articles Two and Three of the Constitution, linked to territorial claims to the North, to give effect to the Belfast Agreement.

He said it was sometimes forgotten that there were two agreements involved.

That agreement was registered as an international treaty in the United Nations.

“We agreed to amend Articles Two and Three of the Constitution. In return the British state agreed to change its legal system so that the European Convention on Human Rights would be incorporated into British law,” he said.

They did that by introducing the European Convention on Human Rights Act into domestic British law.

“We are now told that the British government intends to repeal the European Convention on Human Rights Act as it operates in Northern Ireland.

“Instead we are told it is going to be replaced by some ambiguous unknown British Bill of Rights.”

He pointed out that that was not what Ireland agreed to when it amended its Constitution.

“That was not what this State agreed to when we entered into an international treaty with the UK and registered in the UN.”

He added that unfortunately no one in the Irish Government was emphasising to the British government that they were in breach of their international obligations.

Mr O’Callaghan also criticised the Government for failing to be joined as a notice party in a court case in Belfast on the referendum so that the State could have given Ireland’s view on what was required based on the Belfast Agreement.

Criticising the State’s lack of preparedness for Brexit, Mr O’Callaghan said the first thing the Government needed was to have a plan for the purpose of influencing the European Commission negotiators in talks with Britain.

“We need the European Commission negotiators to recognise Ireland’s unique position because of the Border.”

He also said Ireland needed to identify what it required the EU negotiators to speak of on Ireland’s behalf when they came to negotiate with Britain.

“We need to make decisions on this island to ensure we are protected against the ramifications” of Britain’s exit.