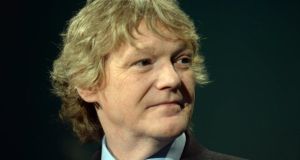 Mr Martin said Mr Crowley could rejoin the ranks of Fianna Fáil TDs and Senators if he were to leave the Tory-led European Conservative and Reformist (ECR) grouping and return to the Alliance of Liberals and Democrats (ALDE).

Fianna Fáil now has no MEPs after the decision of the parliamentary party yesterday to expel Mr Crowley following his defection to the ECR.

Fianna Fáil is aligned with ALDE, and Mr Martin said the party did not share the ECR’s outlook on many policy issues. He said some of the ECR’s members opposed bailouts of euro-zone countries.

When asked if there is a way back for Mr Crowley, Mr Martin said: “Well, if he is to rejoin the ALDE group, of course that would be reconsidered and if he was to leave the ECR, whose views, whose core principles on the European Union, are totally against and are not compatible with Fianna Fáil.

“The views of some of their smaller groups are so far right on a number of issues that they actually contravene equality legislation in Ireland.”

The Fianna Fáil parliamentary party met to discuss the move yesterday and passed a motion from Mr Martin to the effect that Mr Crowley had effectively expelled himself by his actions.

“We do not believe it is in the interest of the Fianna Fáil party and its members to have any association with the ECR in the European Parliament, ” the statement said.

“As a direct consequence of Brian Crowley’s unilateral decision to join the ECR group he has removed himself from the Fianna Fáil parliamentary party.”

A further move to remove Mr Crowley’s party membership, which would have to go to the Fianna Fáil national executive, is not expected.

At the parliamentary party meeting, Kerry Senator Mark Daly, seen as close to Mr Crowley, said he did not support the motion and asked that his dissent be recorded.

A number of TDs said Mr Crowley, who is in hospital and unavailable for comment, should be allowed to address the parliamentary party.