Brexit: Kenny to seek inclusive talks not ‘punishment’ for UK

Pat Leahy, Deputy Political Editor, The Irish Times reports from Dáil Eireann as Taoiseach Enda Kenny outlines the government’s plans for dealing with Brexit in both the long-term and over the next couple of days in Brussels. Video: Bryan O'Brien 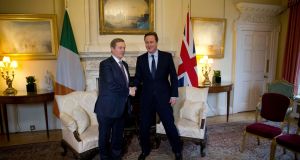 Irish politicians, policy-makers and officials took a few hours off to watch the Ireland-France match yesterday, but even then the phones were buzzing.

For Irish political leaders, their advisers, senior officials and the diplomats that speak for Ireland around the world, the hours since early Friday morning have been frantic and sometimes fraught.

Contingency planning is well and good, but, as one senior Government source put it, “it’s still a shock when it happens”.

Since they awoke on Friday to television pictures of a braying Nigel Farage declaring the death of the EU, the people elected and employed to lead the Republic have been wrestling with two very complicated questions: what happens next, and where does Ireland’s national interest lie?

As yet nobody has clear-cut answers. But sources familiar with the discussions at senior level say some facts about the situation and priorities for the Government are becoming evident. That process will continue as leaders of Europe’s governments come together in Brussels this week to figure out the answer to an even bigger question: just what the hell do we all do now?

There are two principal uncertainties. The first is what exactly is it that Britain now wants as there is no shared agreement on what kind of Brexit the government will seek.

Will the UK look to remain part of the single market or to negotiate a broad trade agreement with the EU that restores its control over matters such as immigration?

Political and official sources say Ireland’s interests clearly lie in Britain remaining a member of the single market, and Ireland will strongly support Britain if it seeks that. That may entail standing with Britain against other EU members who want that option off the table.

But first Britain must decide. Prime minister David Cameron now leads a lame duck administration. So in a way Europe has to wait until the fractious coalition that is the British Conservative Party chooses a leader, and that could take some months.

That will drive Europe crazy for sure, but Europe may just have to live with it. The legal fact is that the EU must wait for the British government to activate the article 50 mechanism for leaving the union. It can’t be activated for them.

Not surprisingly there is a strong appetite in European capitals to punish Britain, both out of resentment and to dissuade other potential leavers.

France and the Netherlands are only two of the countries facing demands from strong and popular anti-EU parties for referendums of their own.

To deter other European countries from leaving, the EU “should refrain from setting wrong incentives for other member states when renegotiating relations”, Handelsblatt reported the document says.

As in every other European crisis, much of what now happens will depend on the attitude of German chancellor Angela Merkel.

So far Merkel has been cautious and – as far as she can – conciliatory.

On Friday she said the severity of the consequences of the Brexit decision depended on whether the remaining EU members “will be willing and able to avoid drawing quick and simple conclusions” from Britain’s exit “that could further divide Europe”.

On Saturday she said she hoped for a positive climate in the talks. She said there was “no need to be particularly nasty” in negotiations which “must be conducted properly”. Speigel, a German news magazine, interpreted her words as to “continue on as before and no overly hasty reforms”.

If Merkel gets her way – and she usually does – the Irish Government will be happy. In particular, the Taoiseach is likely to emphasise tomorrow that it is the European Council – the heads of the governments – which will decide on how to proceed, not anyone else.

The Irish and other governments were less than impressed with the foreign ministers of the six original EEC members meeting to call for a speedy British exit. Sources emphasised that the six have no standing, and will decide nothing. One Irish Government source stressed that Merkel was striking a markedly different tone to the call for Britain to be kicked out forthwith. “I know who we’d listen to,” the source said.

So where do Ireland’s interests lie in all of this?

The UK is our most important relationship, but we remain committed EU members. It’s a balance that will be hard to maintain if relations sour between Brussels and London.

Tomorrow’s summit will be vital in setting the tone and timetable for British-EU relations. With David Cameron absent, Taoiseach Enda Kenny – his closest EU ally – will be the closest thing the British have to a voice at the table. Kenny will counsel calm and the need not to say or do anything which would harden attitudes on either side. It’s a message that Irish diplomats have been pushing since Friday. The Irish Ambassadors in the EU may be recalled to Dublin in the coming week or so for briefings.

But there are also pressing matters to deal with the British. Trade, the North and the Common Travel Area top the priorities for the Government, and contacts between Dublin and London are likely to intensify in the coming weeks.

Dublin is alive to this, and has been sending out soothing signals to Northern politicians. Minister for Foreign Affairs Charlie Flanagan was on the phone to the leaders of the Northern parties last Friday. A meeting of the North-South Ministerial Council is scheduled for next week. Like everywhere else, there will only be one subject for discussion.