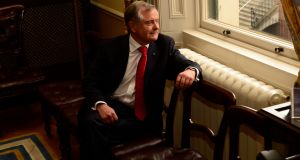 Brendan Howlin: the Wexford TD has become the 12th leader of the Labour Party. Photograph: Cyril Byrne / The Irish Times

Brendan Howlin has defended the Labour Party’s decision not to facilitate a leadership election as he was appointed new leader.

The former minister for public expenditure was chosen by the seven members of the parliamentary party to succeed Joan Burton. However, Alan Kelly was not present for the announcement after he failed to secure the support of another TD to second his nomination to run for the leadership.

Sources close to Mr Kelly said he was extremely disappointed that a contest was not held, and that the 4,000 members of the party were prevented from having their say.

The source, however, denied the former minister for the environment would leave the party.

In a statement Mr Kelly said he believed a contest should have been held but the parliamentary party took a different view.

“Alan Kelly is a good friend and colleague, and I am sure he will be part of the shared leadership. I know he said he would like to be leader but I think Brendan Howlin was the correct person.”

Her decision was criticised by many of her colleagues, including former party chairman Gerry Burke who resigned from the party, and Limerick Labour strategist Joe Kemmy.

Mr Kemmy said: “The grassroots are totally unhappy, and it’s nothing to do with Alan Kelly or Brendan Howlin. We are unhappy because we are denied the opportunity to select the leader of our party. It is bad for democracy, it is bad for us, and it will leave a very sour taste. Some members have already resigned from the party, and I am sure others will go.”

Other members including former senator John Gilroy and former deputy leader Henry Upton confirmed they were considering their positions in the party after the decision.

The Wexford TD becomes the 12th leader of the Labour Party, which was reduced from 37 TDs to seven TDs in February’s general election.

Mr Howlin said he understood the huge challenge he faced but was eager to take it on. He would be travelling the country to meet members to assess how the party could rebuild. That included holding a conversation with former party members Social Democrats TD Róisín Shortall and Independent4Change TD Tommy Broughan.

Mr Howlin said he was immensely proud to become the new leader. “I have set out my stall. Mine will be a shared leadership. We are 12 parliamentarians, but we are hungry and determined. We have 50 councillors and thousands of supporters. I will devote all my energy to not letting them down.”

Mr Howlin was supported by five of his fellow TDs and the five Labour Senators.

Former leader Eamon Gilmore congratulated Mr Howlin on his selection, insisting it was the “right choice at this time”.