Both UK and Ireland failed to focus on loyalist violence

Opinion: The Irish government’s commitment to tackling the IRA has been questioned, but not enough was done to stem attacks from the other side 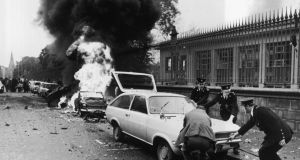 The aftermath of the bombing on South Leinster Street, Dublin, in 1974. A British minister and senior British officials met the UVF leadership immediately before and after the Dublin/Monaghan bombings. Photograph: Pat Langan/The Irish Times

Prof Henry Patterson’s article in The Irish Times last month (“Could Dublin have done more to defeat the IRA?”, September 14th, 2013) gave an interesting perspective on cross-Border security, alleging significant failings by successive Irish governments to come down hard on the IRA during the conflict.

Although this position is now a well-established unionist one, informed discussion of how the two sovereign governments responded to the deadly activities of paramilitary groups on both sides of the Border is welcome.

There is, however, a very different view to Prof Patterson’s. He omitted to mention the critical point that the Border was porous in both directions.

While some IRA members did indubitably flee south after attacks in the North, 50 people were killed in the Republic as a result of loyalist attacks in the opposite direction. Hundreds more were injured, yet not a single loyalist was convicted for any of these murders.

The dominant narrative of a negligent Irish government failing to apprehend IRA fugitives should be balanced with the contrasting account of a failure by the Northern authorities to take effective action against loyalists fleeing north.

In more than a decade of research in the British and Irish National Archives, Justice for the Forgotten and The Pat Finucane Centre have uncovered
declassified documents that shed a fascinating insight into the levels of co-operation between security forces on both sides of the Border.

From early 1974, the British government was anxious to establish formal joint cross-Border security structures. Following a high-powered meeting in Baldonnel in September 1974, four specialist panels were set up under the joint chairmanship of senior officers from both police forces. These officers met thereafter on a monthly basis, co-ordinating cross-border communications; advance planning; ballistics, explosives and detection of supply sources for weapons and explosives.

What is striking about the record of the September meeting is the total absence of any reference to the Dublin and Monaghan bombings, only four months earlier, in which 34 people lost their lives. Nor was there any mention of possible future forays into the Republic by loyalists. The discussions concentrated entirely on IRA violence.

British advice
Inter alia, the documents show the RUC chief constable commenting that the exchange of information between the respective Newry and Dundalk Special Branches could not have been better while minister for justice Paddy Cooney sought British advice on what further measures Dublin could take against the IRA.

By late 1975, the Irish government was doing everything possible to assist the British in their fight against the IRA (it had already agreed, without demur, to the closure of many Border roads and to reconnaissance over-flights into the Republic). The two police forces were also operating joint vehicle checkpoints and had direct telephone/radio links to the highest level (using radios with secure speech supplied directly to An Garda Síochána by the British army).

Mr Cooney told the Joint Oireachtas Committee on Justice in January 2004 that the panels had been the bedrock of co-operation down through the years. As the years went on, he said, “they were refined and provided for consultation at all levels right up to [Garda] Commissioner and head of the RUC.”

In late 1975/early 1976, co-ordinated loyalist pub bombings in Dundalk and south Armagh (followed swiftly by the murders of six members of the Reavey and O’Dowd families) led directly to the IRA murdering 10 Protestants at Kingsmill.

At this critical point, the British prime minister, Harold Wilson, expressed his gratitude to taoiseach Liam Cosgrave “for all the help that has been given to us in the past months and for the excellent results the gardaí have achieved” against the IRA.

The prime minister was informed that these killings were the work of two small groups – UVF based in north Armagh and IRA in south Armagh. The Garda Commissioner proposed, at a meeting on January 8th, 1976, to establish a taskforce to “harass the small number of on-the-runs”. Once again, all the focus was on republican violence. Three days later, the commander of the British army in Northern Ireland expressed the view that “any action designed to put pressure on people north of the Border would be the wrong response to the situation”. Therefore, a clear decision was taken not to arrest loyalist paramilitaries.

‘Excellent arrests’
Later the same year, London lauded the successes of the Joint Co-ordinating Committee (for the panels), praising the Irish government’s “determination to
deal firmly with violent Republicanism” and the Garda’s “excellent arrests and explosives finds”. By comparison, as late as 1987, Chief Supt John Paul McMahon complained to the Garda Commissioner about a “dearth of information on loyalist terrorists”.

It is interesting to note that British minister of state Stan Orme and senior British officials, including Michael Oatley of MI6, held three meetings with the UVF leadership immediately before and after the Dublin/Monaghan bombings, knowing it was responsible for the carnage.

Imagine the outcry if the Irish government had held talks with the IRA leadership immediately before or after the Enniskillen bombing. And, worse still, had failed to even mention the atrocity.

Quite aside from anyone’s view on Dublin’s response to the IRA threat, the records show that both governments failed to focus any significant attention
on loyalist violence.