Both Hanafin and Feeney elected for FF in Blackrock

Fianna Fáil had asked Hanafin to withdraw from race

Harry McGee and Arthur Beesley assess the trends in the Dun Laoghaire/Rathdown local election count where some interesting comparisons can be made with the rest of the country. Video: Darragh Bambrick

Timmy Dooley TD is Fianna Fail's Director of Elections for the local and European elections. Harry McGee asked him for an assessment of the polls so far. Video: Darragh Bambrick 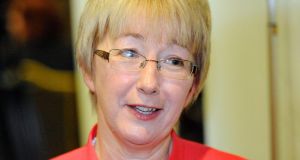 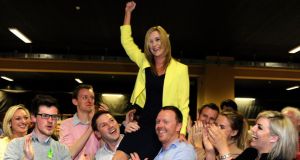 Ms Hanafin was elected to the council on the first count and Ms Feeney on the fifth.

Fianna Fáil approached Ms Hanafin about running in the election earlier this month, believing she could take a second seat in the area along with Ms Feeney, the Ógra Fianna Fáil president.

The approach was withdrawn soon afterwards but Ms Hanafin had her nomination papers and decided to run for the party regardless - despite requests from leader Micheál Martin to pull out.

Speaking yesterday, Ms Hanafin said she had faith in Mr Martin and said she believed he was “doing a tremendous job” even though he asked her not to contest the local elections.

Asked if it had been a difficult few weeks, Ms Hanafin said: “Once I was on the ballot paper and once we got over the initial difficulties, the campaign itself was a pleasure”.

Asked about the prospect of disciplinary action for failing to withdraw when asked, she said: “I know the national executive will want to do what they want to do but at the end of the day they showed me evidence that said if I ran as a candidate we could win two seats. You can’t win two seats if you only have one candidate.”

She said she did not feel resentment towards Fianna Fáil or Mr Martin.

“I’m obviously personally pleased and pleased for my family that we did stand our grand. It was more for my own credibility as a person, as a woman and as a candidate that i would continue having been asked to do this and it has had the right result for both Kate Feeney and myself.”

Speaking to reporters at the CityWest count centre, she said: “I have always been a loyal member of Fianna Fail...I heard Micheal Martin say there were things that could be handled differently and it is water under the bridge”.

She added: “I have great faith in Michael Martin. He has done a tremendous job in the last couple of years in building up the party and we do now need to concentrate on the Dublin area and I would like to be part of that recovery as one of the councillors for Dublin, particularly with women in the capital.”

Despite not being recognised by the party as an official candidate, Ms Hanafin said she used the Fianna Fáil leaflet and poster during the campaign and put Ms Feeney’s “name on everything and looked for number twos for her”.

“There might have been difficulty at the beginning about the nomination but once we got into the campaign and certainly the election it was very much about Fianna Fáil.”

She said she was glad she looked to have helped Fianna Fáil take two seats and 27 per cent of the vote in Blackrock, which she described as a significant increase. Asked if she would consider running for the Dáil again, Ms Hanafin said she had “one priority and one mandate”.

She had always kept the door open to a return to politics but “I didn’t quite expect it was going to be so quick but I’m delighted to take this opportunity now.”

Asked if her return was a sign of the old Fianna Fáil guard that landed the State in the bailout returning, she said: “I was a member of the last government and last cabinet and I think the people of Blackrock have now shown that they have faith in me personally and my ability to represent them and I think having a new electoral mandate will be a help in that.”

Ms Hanafin said she would not be “taking any income or allowances from the council.”

Ms Feeney last night said she had not spoken to Ms Hanafin since the results had become clear. She said she had no view on the issue of disciplinary action over Ms Hanafin’s decision not to withdraw and that she felt no soreness towards the former minister.