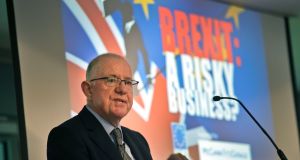 Minister for Foreign Affairs Charlie Flanagan: “I fail to see how the introduction of customs and passport controls between Ireland the UK will not become a live issue if there is a vote to leave.” Photograph: Brenda Fitzsimons

Border controls between the island of Ireland and Britain are inevitable if there is a Brexit, according to official sources on both sides of the Irish Sea.

A strict new regime for travel between the two islands is already under consideration if the UK votes next month to leave the European Union.

The impossibility of sealing the 500km border between Northern Ireland and the Republic has put the focus on new travel arrangements.

Such a move would mean British citizens travelling from Northern Ireland would be subject to customs and border controls at air and ferry ports in Britain.

The House of Commons Northern Ireland committee has warned that strengthened identity checks on travellers between the two islands may be a more feasible option than the reintroduction of controls along the land border between North and South.

One Irish Government source said: “Immigration is the major argument in favour of a Brexit so in the event of a vote to leave it is inconceivable that the British would allow Ireland to become a back door for immigrants who could avail of the common travel areas.”

He added that Irish and British officials were acutely aware that it would be impossible to seal the land Border between Northern Ireland and the Republic so travel restrictions between the two islands would be inevitable.

The Commons committee warned in a report entitled Northern Ireland and the EU Referendum that imposing controls along the land Border, which is crossed by up to 30,000 commuters a day, would cause considerable disruption.

It adds there must be doubts about the extent to which, in the event of a Brexit, the Border between Northern Ireland and the Republic could be effectively policed.

Minister for Foreign Affairs Charlie Flanagan told The Irish Times that restrictions on travel between the islands had not been raised with him to date.

However, he added that the reintroduction of controls along the land Border in the event of a Brexit would be “a nightmare of huge proportions.”

“I fail to see how the introduction of customs and passport controls between Ireland the UK will not become a live issue if there is a vote to leave,” he said.