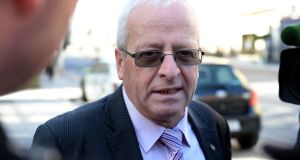 There is “no logic” to regulations in the hospitality sector where a hotel can hold a wedding with up to 50 people but cannot host a funeral party for the same number the Dáil has been told.

Independent TD Mattie McGrath said there were “blatant contradictions” in the regulations.

He said a hotel “can hold a wedding reception for up to 50 people but may only host a party of six for any other important family event such as a christening, a birthday or, sadly, a bereavement.

“This is decimating their businesses. It is bizarre, illogical, devastating to the industry and dangerous for the very spirit of our community way of life”.

The Tipperary TD was speaking as he introduced a private member’s motion calling for the removal of the regulations.

The requirement for pubs to keep records of every food order for 28 days “is even less relevant now that the Government has announced that our traditional pubs will be reopened on September 21st”.

Minister for Health Stephen Donnelly however defended the regulations and said the number of cases in the previous fortnight during July was three per 100,000 people to 35 now and the average number of cases over the past five days was 175 per day.

They were not at the level seen in April or May but “we are on an upward trajectory”.

In a later debate Mr Donnelly said the World Health Organisation had previously said that “Ireland stands out for its political solidarity” compared to other countries which had used Covid as a political football.

He said however that “we’re not doing as well as we were and the WHO might score us a little less” and criticised TDs who publicly decried measures that they knew were saving lives.

He said Ireland is now in the “second chapter” of the pandemic which aimed to suppress the virus.

Limerick Independent TD Richard O’Donoghue urged TDs to support the motion “for the IFA, Macra na Feirme and organisations that can have only six at a meeting”.

Mr O’Donoghue said 159 TDs could turn up to Leinster House. They might not all be allowed into the chamber but “we are using common sense and we bring masks” and he said the same responsibility should be given to the public.

Independent TD Jackie Healy-Rae said “savage pressure” was required to get pubs open but he could not understand the Government because “when there was less than ten cases a day, it would not allow the pubs to open. Now there are 320 cases a day and it can open the pubs no bother.”

He referred to pictures last week of a man and his son on the roof of a car to watch a GAA match from the roadside while two others were on a ladder. He claimed “this is the result” of the Taoiseach’s pledge to work with the GAA to see how many more people could be let into stadiums to watch matches.

Sinn Féin health spokesman David Cullinane accused the Government of issuing mixed messages and missed targets on testing and tracing. He said all pubs should now be open on the same basis.

Pubs need to be re-opened to allow for their impact in “delivering intergenerational solidarity, serving the fundamental human need to get out of the house and coalesce with other members of a community, to meet, talk, chat, bitch and moan”.

The Dáil will vote on the motion on Thursday.