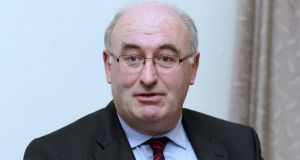 Legislation that will result in the biggest change in local government structures has been published by Minister for the Environment Phil Hogan.

The Local Government Bill proposes to almost halve the number of councillors in the country and will scrap all 80 town councils.

The abolition of town councils, which have been in existence for 115 years, accounts for the massive reduction in councillors – down from 1,627 to 949. In addition, the two councils in counties Tipperary, Waterford and Limerick are each being merged into one.

While the Government has argued that the Bill is a radical reform, the scrapping of town councils has been roundly criticised by all Opposition parties and by town councillors, whose positions will cease to exist after next year’s local elections. The councils will be replaced by 137 municipal district councils comprising county councillors from their respective electoral areas.

“It is very disappointing. You are destroying town councils,” he said to Mr Hogan at the event to publish the Bill yesterday.

The Bill provides for the abolition of the 80 town councils, which will be replaced by new entities, municipal district councils. These will be much larger entities, encompassing both urban and rural areas. Town councils will lose their independent financial revenue-raising powers. Instead, dictrict councils will be handed down annual financial allocations, irrespective of the amounts of money raised in each dictrict.

Revenue
Mr Hogan said the changes would devolve power to local and regional level. He said a major component of this will be the revenue raised from the property tax, 80 per cent of which will be ringfenced for local authorities; and, from 2015, councillors will have the power to vary the revenue to suit local needs.

Fianna Fáil environment spokesman Barry Cowen said the Bill continued the Coalition’s policy of moving power into the hands of the elite. He said the municipal districts were “window-dressing”.

Sinn Féin said it opposed the reduction in the number of councillors to 949, saying it had proposed there should have been at least 1,165.