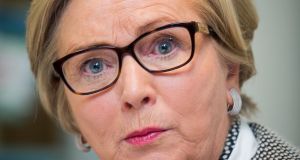 Minister for Justice Frances Fitzgerald: her legislation requires solicitors to give their clients specific advice about available mediation services before they opt for court proceedings. Photograph: Gareth Chaney Collins

Lawyers will be obliged to advise their clients to consider the use of mediation before they opt for court proceedings under legislation introduced in the Dáil by Tánaiste and Minister for Justice Frances Fitzgerald.

The Mediation Bill, which is intended to cut legal costs and time spent resolving disputes, requires solicitors to give their clients specific advice and information about available mediation services before they opt for court proceedings.

The legislation will also apply to barristers “if and when in future they are permitted to issue proceedings directly on behalf of clients”, the Minister said.

And lawyers will have to make a statutory declaration to the court that they discharged their duty under the legislation. “We must be absolutely clear that those who could benefit from mediation will be told this by a solicitor, or in future, by a barrister,” Ms Fitzgerald said.

The Bill provides for the development of a mediation council if in the future various bodies involved in mediation come together and satisfy the Minister that they can do the work of regulation.

Ms Fitzgerald said the Bill’s aim “is to promote mediation as a viable, effective and efficient alternative to court proceedings, thereby reducing legal costs, speeding up the resolution of disputes and relieving the stress and acrimony which as we know often accompanies court proceedings”.

The Minister stressed that mediation would remain a voluntary process although a court could recommend it and court proceedings could be set aside if litigants participate in the mediation.

She defined it as “a facilitative voluntary process in which the parties to a dispute with the assistance of a mediators, attempt to reach a mutually acceptable agreement to resolve their dispute”.

The legislation will, however, not apply to disputes in certain areas such as those covered by the Workplace Relations Commission, or matters under tax and customs legislation.

It will also exclude childcare, domestic violence, judicial review and proceedings against the State dealing with alleged infringements of human rights.

Ms Fitzgerald said these were areas “where we feel it is not appropriate for mediation to be used”.

In addition to being a voluntary process, the parties themselves determine the outcome of the mediation process. In exceptional cases a mediator may make proposals for the resolution of the dispute, with the agreement of all parties.

Ms Fitzgerald told the Dáil that more than 20 years ago, the National Women’s Council, of which she was then chairwoman, operated a “fledgling mediation service under Maura Wall Murphy and the government of the day intended to abolish it”.

The Tánaiste said she intervened and “ensured it was allowed to continue and we have seen its progress over the years”.

She added: “It gives me particular personal satisfaction to bring forward the Bill today.”

The Minister said she believed it “has a vital role to play in reducing stress levels for people involved in various disputes and in providing a speedier, more efficient and less costly alternative to going to court”.