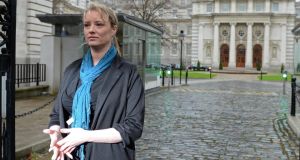 A lawyer representing two women who say they were sexually abused as teenagers by the same IRA man who abused Maíria Cahill has said they were totally let down by the criminal justice system in Northern Ireland after trying to pursue prosecutions.

Both women, neither of whom wishes to be named, have said the West Belfast IRA member abused them over a three-year period in the late 1990s, starting when they were 13 and 14 respectively.

But having first made complaints to the PSNI about the abuse in 2010, they withdrew their statements against the alleged perpetrator in December 2012 after adjournments and delays in the criminal process which they found “wholly unacceptable and illogical”.

In a lengthy statement the women’s solicitor Ciarán Mulholland said: “They had lost all faith and trust in the criminal justice system and believed they were being exploited merely for political point-scoring.”

The basis of their objection was that the prosecution services in the North had prioritised the related case where four republicans from Belfast were accused of IRA membership. All were allegedly involved in the handling of allegations brought by Ms Cahill that she had been repeatedly sexually abused by the IRA member in 1997, when she was 16.

In the statement Mr Mulholland said that in October 2012 the trial was due to commence but two days prior to this the women were informed it had been “adjourned indefinitely” to facilitate the IRA membership case.

“We found this to be wholly unacceptable and illogical. It was neither a victim-focused decision and ultimately undermined the prosecution of the original case. Our clients and their family feel they have been totally and utterly let down by the criminal justice system. Our clients’ feel that their case against [the alleged rapist] was being held in less importance than the membership case involving several other individuals.”

After lengthy correspondence and a meeting with senior figures in the Public Prosecution Service the two women withdrew their statements because no progress had been made.

Last week it was announced that former director of public prosecutions for England and Wales Keir Starmer will conduct an independent review of the prosecutorial system and processes involved in the three cases. His review is expected to be complete by next Easter.

Mr Mulholland said notwithstanding the appointment of Mr Starmer his two clients “would rightfully question how independent and transparent the review will be”. He referred to the need for clarity on the terms of reference and the powers the inquiry would have.