Alliance Party’s Naomi Long ‘delighted’ to be back in Assembly 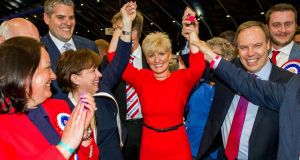 Joanne Bunting of the DUP celebrates after being elected as MLA for Belfast East at the Titanic Exhibition Centre in Belfast. Photograph: Liam McBurney/PA 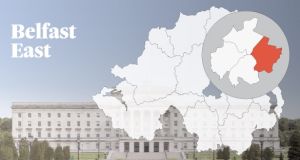 Wounded Afghanistan veteran Andy Allen won the Ulster Unionists’ only seat in Belfast with victory in the east of the city.

Mr Allen, who was badly injured in a Taliban bomb blast, said he was delighted to win the seat in his own right, having been co-opted into the legislature last year.

“It’s an honour and a privilege to be elected as an Ulster Unionist MLA for east Belfast,” he said. “I am indebted to the people of east Belfast who have placed their trust in me to serve them as an MLA. I thank them sincerely from the bottom of my heart and I will do everything I possibly can to represent them to the best of my abilities.”

While Ms Bunting is a first-time MLA she has worked for her party at Parliament Buildings for years. The former Castlereagh council mayor said she was in shock after topping the poll.

“It’s most unexpected, it’s a really honour,” she said. “I thought I would be slogging it out last at the end, maybe in with a chance. I am still trying to absorb it. I am really honoured to be able to serve the people of east Belfast.”

Following Ms Bunting in on the first round of votes was high-profile Alliance party deputy leader Naomi Long. The former MP for the constituency said she was delighted to be making a return to the Assembly.

“It feels really good to be back,” she said. “Today has been a good day in east Belfast for Alliance. There are no easy votes for Alliance – they are all hard fought and won.”

Ms Long batted away questions about whether she held ambitions of taking a ministerial position in the new power sharing executive. “I have no ambitions other than getting a good’s night sleep,” she said on Friday night.