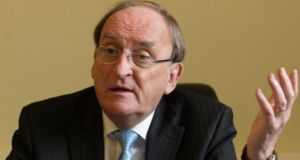 Ceann Comhairle Seán Barrett said his ruling on the Dail debate on the establishment of an inquiry into claims of Garda malpractice was based on the public interest.

Ceann Comhairle Seán Barrett has rejected any implication that his ruling not to hold a debate on the establishment of an inquiry into claims of Garda malpractice was influenced by others.

In an RTÉ radio interview this morning Mr Barrett said: “Attempts are being made to suggest that I was influenced in some way in the performance of my duties. That is incorrect.”

Mr Barrett said his only involvement was to decide on whether he would allow the motion to be put through the House without debate, or to “take a chance” and have a debate on the terms of reference.

Former minister for justice Alan Shatter wrote to the Ceann Comhairle arguing that the inclusion of references to his handling of Sgt Maurice McCabe’s claims in any debate on the new Garda malpractice inquiry would interfere with or prejudice a High Court action Mr Shatter is taking.

Mr Barrett said he based his decision on the advice given to him and was not influenced by correspondence.

“I am not influenced by letters. I take decisions in accordance with the standing orders of Leinster House, and standing order 57.3 allowed for what I did the other day, and I stand over that in the interest of the public,” he said.

“Alan Shatter wrote back in November in this matter, and I didn’t reply because I had no terms of reference”.

“I’ve been dragged into this because this is a governmental matter, not for me as Ceann Comhairle.

“My only involvement is procedural, and I have a responsibility to the people of this country that the investigation which was being set up should go ahead, and after that it’s over to the personnel carrying out the investigation to deal with and produce a report,” Mr Barrett said.

“I certainly did not bow to pressure from anybody, and that’s where the uncertainty is coming in. They wanted Alan Shatter’s name deleted from the terms of reference- that was a matter for the Government, not for me.

Mr Barrett said he "did not receive a personal letter" as reported in The Irish Times on Friday. “That is incorrect.

“I got no personal letter. The letters I received were addressed to the Ceann Comhairle.

Mr Barrett was also rejected criticism from the Minister for the Environment Labour Party deputy leader, Alan Kelly, made during a private meeting of party TDs and Senators earlier this week.

“Alan Kelly had no business saying what he said because he didn’t know the facts. And I made it clear to the Tánaiste yesterday that I objected to that remark.

“He didn’t know the facts. And people are speaking without actually addressing the facts.”

The Ceann Comhairle also suggested that the main Opposition parties were out to undermine him.

“Of course they are, it’s perfectly obvious. Because this is no business of plain politics, this is a unique situation where a deputy who was minister for justice has a case pending in the High Court, and who has already through his solicitors sought from me and from the Government to have his name deleted from the terms of reference.

“I really object to the manner in which this is being reported, which is obviously designed to put me in a bad light, and affect the confidence in my independence as Ceann Comhairle.”