Banking inquiry unlikely until next year at earliest 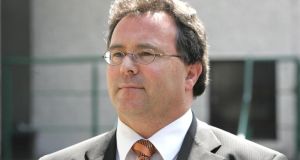 Seán Fleming: ‘No politician has anything to fear’ from a banking inquiry. Photograph: Cyril Byrne

The long-promised Oireachtas inquiry into the banking collapse is unlikely to take place until late next year at the earliest because of a serious bottleneck in publishing legislation.

In its least productive session since coming into power, the Government published only nine of the promised 30 Bills on the spring legislation programme, with eight of those Bills carried over from the winter session.

Among the legislation not published is a cluster of Bills that propose to effect major reform in Government accountability and transparency. In addition to the Oireachtas Inquiries Bill, there was a substantial amendment to the Freedom of Information Act and new whistle-blower legislation that would protect those making disclosures in the public interest.


Capacity constraints
The delays have been attributed to the priority given to legislation that has been highlighted by the EU-IMF troika as well as to capacity constraints in the Office of the Parliamentary Counsel to the Government, which drafts Government Bills. There is a lack of specialised drafting lawyers available in the office to cater for the volume of legislation.

The Banking Inquiries Bill is expected to be published next month, as well as the legislation on protecting whistle- blowers, and the amended FoI Act. There are a number of minor amendments to the inquiries legislation from the draft published last autumn. The main one gives the Committee on Procedure and Privileges in each House the same powers as the Ceann Comhairle or the Cathaoirleach of the Seanad in deciding if an inquiry should be initiated.

Even then, it is not guaranteed that any of the three Bills will become law before the summer break as they will have to make way for the two expected priority pieces of legislation: the Bill to make abortion legal in certain circumstances and the Bill that will pave the way for a referendum to abolish Seanad Éireann.

Given the divisive nature of these two Bills, it is expected that a considerable amount of time will be allotted for debate on each in the Dáil and the Seanad.

The prospect of a banking inquiry taking place before the middle of next year is remote, according to those familiar with the process. In addition to the delays in legislating, any prospective inquiry will not be in a position to start public hearings until all major court cases associated with the collapsed banks have concluded. The hearing phase of the inquiry will also have to be preceded by a preliminary exercise to identify all the issues and questions involved.


Shortcomings
Fianna Fáil spokesman on public reform Seán Fleming said yesterday that, in his view, part of the reason for the delays was that senior public servants did not want a public banking inquiry. He said that in such an inquiry, the shortcomings of advice within Government departments would be revealed in addition to the political failures of Government Ministers.

He said Fianna Fáil had already paid the full price for its failures. “In one way, a banking inquiry would give the likes of Brian Cowen and Bertie Ahern an opportunity to put their side on the record. No politician has anything to fear. On the other hand, it would show how inept the [advice from the] Department of Finance and the Central Bank were,” he said.