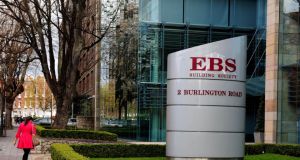 The EBS company headquarters in Dublin. The banking inquiry has heard that the company did not consult its auditors on its move into commercial and development property lending. File photograph: Aidan Crawley/Bloomberg

Educational Building Society (EBS) auditors were not consulted about the financial institution’s move into commercial and development property lending, the banking inquiry was told.

Ernst & Young (EY) audit partner Dargan Fitzgerald said the turning point for the EBS came in 2005 when the building society decided to compete with other financial institutions in commercial property lending.

He also said the financial losses reported did not cause the crisis and were not linked to the underlying causes.

Asked by Fine Gael TD Kieran O’Donnell if the changes in the reporting of losses were because financial institutions were “smoothing out losses”, Mr Fitzgerald said: “I don’t think the financial reporting of the losses was linked to the presence of the underlying causes of the crisis.

“The losses reported in any particular period are a consequence of the factors that caused the crisis. They didn’t cause the crisis.”

Socialist Party TD Joe Higgins said EY operated in 150 countries, had a gross income of €27.4 billion in 2014 and given its history would have seen the loans and savings debacle in the US in the 1980s and the banking crisis in Sweden.

Mr Higgins said EY “should have seen that what was happening in Ireland was a replica of what caused all these previous bubbles and disasters”.