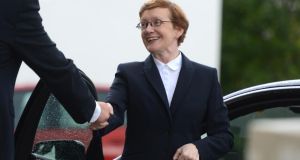 Attorney General Máire Whelan instructed the Garda not to destroy tapes from stations around the country.

Attorney General Máire Whelan issued a formal instruction to the Garda Síochána earlier this month that all tapes made in stations around the State were not to be destroyed.

She took this decision around noon on Thursday, March 20th, on learning that the legal affairs division in the Garda Commissioner’s office was seeking permission from the Data Protection Commissioner to destroy their archive of recordings. It has subsequently emerged that the Garda authorities have 2,485 tapes in their possession.

The Irish Times has learned that the Attorney General had not been informed of the systemic unauthorised taping in Garda stations on November 11th, 2013.

Routine request
The memorandum presented to her office at that time was a routine request for the nomination of legal counsel to advise on the disclosure obligations in the Ian Bailey case. It has also been confirmed that the Garda Síochána and the Department of Justice are currently dealing with the order for discovery made by Mr Justice John Hedigan on May 17th, 2013, in respect of at least three recordings.

The analysis of remaining recordings is continuing, according to a letter dated March 10th from former Garda commissioner Martin Callinan to the secretary general of the Department of Justice. They include recordings of telephone calls between journalists and members of the Garda at Bandon station.

“It has since transpired following inquiries that systems would appear to have been installed during the 1980s in Garda stations to allow for the recording of incoming and outgoing telephone calls from designated extensions,” Mr Callinan said in his letter.

The rationale behind this, he stated, was the recording of Garda radio traffic to and from control rooms, 999 calls and the gathering of evidence around calls made to Garda stations regarding bomb threats and other code word messages. This practice had continued in some stations, he added, with the relevant recordings being retained within the station itself. The former commissioner made a general reference at the meeting in the Attorney General’s office last November to systems put in place in Garda stations – then thought to be in the 1970s – to allow for the recording of telephone calls.

Bailey case
The issue came to light because a member in the Bandon station, when asked for any material which might be relevant to discovery in the Bailey case, came forward with tapes of conversations which took place at the time of the murder of Sophie Toscan du Plantier. The commissioner was inquiring from the Attorney General’s office whether there was anything which would stop him from directing the destruction of recordings.

The Irish Times has confirmed that the Attorney General was not aware of the working group set up by Mr Callinan to investigate the unlawful recordings of conversations. She did not initiate it nor was she a member of it. She first learned of it last week.