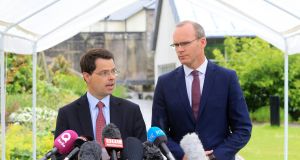 James Brokenshire, Northern Secretary, and Simon Coveney, Minister for Foreign Affairs, admitted the game was up shortly before lunchtime on Thursday outside Stormont Castle. Photograph: EPA

Another day, another deadline stretched in Northern Ireland.

In the North, deadlines are notoriously elastic creations, even if they have Westminster legislative status.

There was a big build-up to Thursday’s 4pm target for an agreement to re-establish the Northern Executive and Assembly.

It wasn’t like other big peace and political process occasions, but there was a reasonable number of journalists camped at Stormont on Thursday and, before other matters intruded, the story was getting significant coverage on air and in print.

There was some British and Irish governmental hope that the energy, tension and excitement might impel the DUP and Sinn Féin to resolve their differences, particularly over the Irish language, and reach agreement. But no chance.

There are more days left in this process. But how many?

The Minister for Foreign Affairs Simon Coveney and the Northern Secretary James Brokenshire effectively admitted that the game was up shortly before lunchtime on Thursday when they addressed the press in the pouring rain outside Stormont Castle.

The two Ministers said they were encouraged that the parties were engaging “intensively” and that the “prize” of a deal remained achievable.

Brokenshire is to reflect over the weekend what to do next and to make a statement in the House of Commons on Monday. So that is the new latest deadline – possibly until the next one again.

If that Monday deadline is breached then Brokenshire again will be faced with decisions: whether to find some mechanism to extend the period for a deal over the summer and into the autumn; whether to call new Assembly elections; or whether to formally hand over the running of Northern Ireland to Westminster British direct rule ministers.

It all seemed like a lot of high drama for a low return. Sinn Féin is insisting on a free-standing act while the DUP wants a hybrid piece of legislation that also includes Ulster Scots. But as many nationalists have said, and as also acknowledged by Alliance leader Naomi Long, the language issue is “totemic” of something deeper.

Nationalists were so incensed by what they interpreted as the gratuitous dismissal of the Irish language by Arlene Foster and her DUP colleagues in the run-up to the Assembly election in March that they retaliated with a Sinn Féin surge, bringing the party just one seat short of the DUP in the Assembly.

The DUP response to the language was further analysed as more widely reflective of a dismissive DUP attitude to nationalists and nationalism generally. So, the act is about more than language, it is about Sinn Féin and the SDLP seeking “to put manners on the DUP”.

But it seems disproportionate to the issues at play that the Northern Executive and Assembly would remain in cold storage because of a failure of seasoned DUP and Sinn Féin negotiators and advisers to find some compromise over one issue which, most sources agree, if solved would break the entire political deadlock.

At the moment the newest deadline for doing that is Monday. If it goes much beyond Monday, we will be entering political pantomime territory.