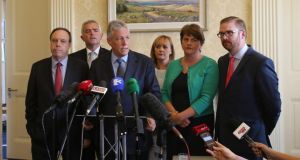 Northern Ireland First Minister Peter Robinson at Stormont, Belfast, with (from left) Nigel Dodds, Johnathan Bell, Michelle Mcilveen, Arlene Foster and Simon Hamilton, announcing he is standing aside and the majority of his Democratic Unionist ministers are to resign, with Ms Foster to take over as acting First Minister. Photograph: Niall Carson/PA Wire

The IRA attempted to kill her father, a part-time policeman with the Royal Ulster Constabulary, while she was a schoolgirl.

As a teenager in 1988, she survived a bomb which exploded under her school bus.

She was first elected to represent Fermanagh and South Tyrone as an Assembly Member with the Ulster Unionist Party in 2003.

A qualified solicitor, she was part of a right-wing faction within the UUP – known as the “baby barristers” – which opposed David Trimble’s support for the Belfast Agreement.

She defected to the Democratic Unionist Party in 2004 – just weeks after an election – and was re-elected in March 2007 and again in May 2011.

Ms Foster was first appointed Minister of Enterprise, Trade and Investment in June 2008. Prior to that, she was Minister for the Environment.

She previously stood in as acting First Minister for six weeks in 2010 when Peter Robinson stood down to deal with allegations concerning his wife’s personal and financial affairs.

She was appointed Minister for Finance and Personnel in May.