Christopher Quinn shot dead by army in Beflast in 1971 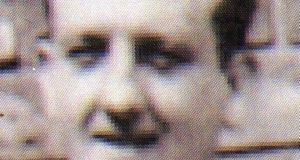 Christopher Quinn’s widow had sought compensation of £10,000 but eventually reduced this when it was made clear the ministry would contest the claim

A Belfast widow, whose husband was shot by the British army in 1971, received less than a tenth of the compensation she would have received if she had fought her case, official British files have revealed.

The papers from the ministry of defence (MOD) about Christopher Quinn, who was shot on November 4th, 1971, have been found in the National Archives in London by the Pat Finucane Centre.

In the files, lawyers say of the 39-year-old father of five, who had formerly served in the British army, that “it is fairly certain that [he] was not involved with the gunman, but simply got in the way”. His widow, Mary Jane, had sought £10,000 in compensation in a case to be heard six years later, but she eventually reduced her claim to £750 when it was made clear the ministry would contest.

“The case was valued at some £10,000 and it has been our intention to fight the case on the grounds that the soldiers concerned were justified in opening fire when they did, and had acted in accordance with their instructions.

“We knew that the chances of winning the case were not good, as a jury is likely to be sympathetic with a widow left with a young family to support, however we felt that the onus should be put upon the plaintiff to prove her case in court,” wrote a ministry lawyer.

Original estimate
Accepting the offer in June 1977, Mrs Quinn also accepted that a judgment would be issued in the ministry of defence’s favour “as part of the settlement”, the files now held in the National Archives reveal.

“This represents a very small amount compared with the original estimate of damages and would in fact be cheaper for us than the cost of running the case, as we would not be able to recover witness costs even if we won.

“As judgment would be in our favour the settlement would reflect well on the MOD from a political viewpoint. We have therefore authorised our senior council to settle,” said the document.

Mr Quinn’s daughter, Roberta O’Neill, who said her mother “had never got over” the killing, said the files showed “that they knew he was innocent but they lied to us all these years.

“We went to the graveyard every day with my mother after school . . . a few times we were even locked in the graveyard. She taught us decency and respect which is more than she got,” she added. “My mummy worked day and night. She had three cleaning jobs and would queue at the post office at 8am waiting to get money to send us to school. I used to sleepwalk all the time because I was afraid of losing my mummy afterwards. My dad was shot only yards from our house and we had to walk past the spot every day,” she said.

Responding to the papers, Paul O’Connor of the Pat Finucane Centre said: “There are many similar documents re: out-of-court settlements. They had a clear policy of settling out of court in order to avoid judgments which cast the British army in a bad light.”