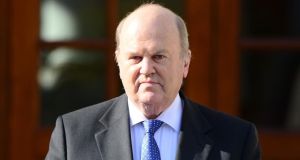 Minister for Finance Michael Noonan’s office expects “consultancy and other costs” to grow by €500,000 to more than €6.5 million this year. Photograph: Bryan O’Brien

Spending by most Government departments on consultancy services, value-for-money reviews, agency services, advertising and publicity are set to rise this year, according to revised estimates for the public service.

According to a breakdown of budgets for 2017, the cost of running the Civil Service, which staffs the central Government departments, is scheduled to rise by 5 per cent this year to just over €2.2 billion, with pay costs increasing by 4 per cent since last year.

However, spending under a series of headings shows much greater increases. Payments for “agency services” will rise 43 per cent over last year’s figure to €137 million for 2017.

The bill for office machinery and related services, which includes spending on external IT services, is increasing by 8 per cent to €235 million. “Incidental expenses” across the Civil Service will increase by 22 per cent this year to more than €82 million.

The Civil Service budget allocation for “consultancy services, value-for-money and policy reviews” will rise by 15 per cent to almost €10.5 million.

However, this includes consultancy spending relating only to core Civil Service administrative functions, the Department of Public Expenditure explained. Total spending on consultancy across the public service will be just under €50 million. This represents a marginal decline on the 2016 figure.

There have been significant reductions in spending on the establishment of shared-services projects, which centralise functions such as HR and payroll. The expenditure on consultancy in this area will fall by more than €7 million this year.

Consultancy services for water quality, under the Department of Housing and Planning, will fall from more than €1 million to just under €200,000.

The Minister for Finance’s office expects “consultancy and other costs” to grow by €500,000 to more than €6.5 million this year, while the office of the Minister for Public Expenditure will see consultancy expenditure grow by a similar amount to €2.3 million.

Spending on consultants will triple at the Irish Human Rights and Equality Commission to €300,000. The Department of Social Protection will also see a tripling of its spend to more than €1 million.

The costs of “advertising, information resources, publicity and government publications” will rise by 29 per cent, to €624,000.

Civil Service insiders say some of the increases represent investments in the budgets for equipment and programmes postponed during the years of austerity budgets.

Asked about the increases in the budget for consultancy services, a spokesman for the Department of Public Expenditure said individual spending on programmes was a matter for each department.