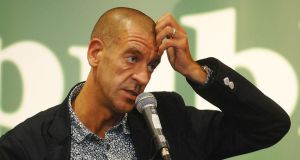 Professor Diarmuid Ferriter of UCD: a timely critique of the power the Economic Management Council has accrued to itself

I left Glenties yesterday with my head full of the insights of others and my in-box full of their scripts. I also came away with enough material to inform a summer of columns.

The politics and policy boot camp which is the MacGill Summer School involves listening to more than 60 speakers over six days. Inevitably, those dealing with the political system interested me most and from these I came away with the sense that there was a growing understanding of the need for real reform of our political system.

Even the Taoiseach in his opening address on Sunday was forced to at least talk in terms of reforming the system. He reiterated his determination to abolish the Seanad and in answer to questions promised that exact details of the changes to the Dáil which would be implemented if the Seanad was abolished would be published in September.

Murphy delivered one of the best speeches of the week and by far the most entertaining. It began as a supposedly fictional tale entitled “Confessions of a Button Pusher: show up and shut up – the life of a Government backbencher”. The story described how a tightly whipped first-time Government deputy, overwhelmed by the constituency and party demands upon him, became frustrated at his impotence.

For the second half of his talk, Murphy switched to non-fiction mode. He acknowledged that as a new deputy he had been given the opportunity to make some contribution as a member of the Public Accounts Committee but was strongly critical of our parliamentary culture, where independent action is discouraged and dissent severely punished.

These were followed by equally significant comments on Twitter that evening from Charlie Flanagan, chairman of the Fine Gael Parliamentary Party. The momentum for real Dáil reform, he said, was becoming evident and the Government versus Opposition dynamic needed to change to one of Government versus parliament, with the Dáil flexing its muscles.

Addressing the theme of “our ambiguous republic”, the historian Diarmaid Ferriter said that in spite of all the talk of a “democratic revolution” which Fine Gael and Labour maintained their election victory in 2011 had ushered in, there was little sign of that meaning anything in reality.

Ferriter pointed out that “even the Cabinet as an entity now plays second fiddle to the Economic Management Council”. It was a timely critique, echoing as it did comments made by Joan Burton to Harry McGee in this paper on Monday. Whatever about Burton’s comments, Ferriter’s view cannot be dismissed as being made by someone with an ulterior political motive.

The most compelling critique of our political system at MacGill came from the ombudsman Emily O’Reilly. She leaves in September to become European Union Ombudsman so her comments can be seen as a parting shot.

The executive, she said, “is planting its boot far too firmly on the neck of the parliament and wielding power in a manner never envisaged by the Constitution”.

O’Reilly detailed one experience when she had reason to believe an Oireachtas committee was about to incorporate in a report some criticism she had made of secrecy and non-disclosure provisions of domestic legislation.

Ultimately however, she recounted, “ the government whip was swiftly applied and in every single instance where a minister disagreed with me, the government members sided with the minister”.

I was struck in particular by an observation the Ombudsman made about the nature of this debate: she wondered whether the very fact that criticisms of the actual workings of parliament are now “being reiterated week in and week out has dulled our sense of discomfort and unease”.

It can only be a good thing, however, that the need to improve our political system got a full airing this week before the silly season starts. We can only hope that these deliberations help to maintain momentum for real reform when the Dáil reconvenes.