Former Wimbledon champion does not ‘regret giving an opinion’ on referendum 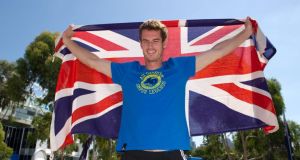 Andy Murray: “I think it was amazing how many people turned out to vote. I personally wasn’t able to vote. I trust the Scottish people made the right decision.”

Former Wimbledon champion Andy Murray, who was abused on social media for tweeting his support for Scottish independence last week, was disappointed over the matter but did not “regret giving an opinion”.

The 27-year-old Scot tweeted his support for the Yes campaign a few hours before the polls opened last Thursday, but said today he thought the United Kingdom was now going to be stronger after Scottish voters rejected independence.

Speaking to the BBC in China today, he said: “It was a very emotional day for Scottish people and the whole country and the whole of the UK – it was a big day.

“The way it was worded, the way I sent it, is not really in my character. I don’t normally do stuff like that. So, yeah, I was a bit disappointed by that. It’s time to move on. I can’t go back on that and I’ll concentrate on my tennis for the next few months.”

Murray, who has 55,000 Twitter followers, tweeted: “Huge day for Scotland today! No campaign negativity last few days totally swayed my view on it. Excited to see the outcome. Lets do this!”

Murray, who won the Wimbledon men’s singles title last year to become the first British winner since Fred Perry in 1936, was then subjected to online abuse with one hate message referring to the Dunblane massacre in 1996.

He was a pupil at the Dunblane school where Thomas Hamilton murdered 16 children and their teacher.

Asked what he meant by his tweet, Murray replied: “I don’t want to go into too much detail about it, it’s been obviously a hard few days for me. From my side, I just want to move on from it and hope everyone can.

“I think it was amazing how many people turned out to vote. I personally wasn’t able to vote. I trust the Scottish people made the right decision.”

Murray has never been universally popular in England, especially after his comments he made as a rising teenager when he said in an interview he supported “whoever England were playing against” in football internationals.