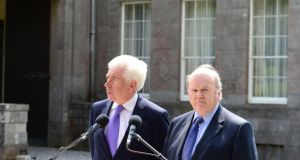 Ministers Michael Noonan and Alex White prior to the final Cabinet meeting at Lissadell House, Sligo before the summer recess. Photograph: The Irish Times

As the Cabinet met in the serene setting of Lissadell House in Sligo on Wednesday for the last time before the summer recess, an oft-repeated quote came to mind.

It did not come from William Butler Yeats, so closely associated with this historic house and surrounding countryside, but from the lesser known poet Albert Reynolds.

As he reluctantly stepped down as taoiseach in 1994, Reynolds ruefully remarked: “It’s the little things that trip you up.”

And so it is with this Coalition. When it took over running the country in March 2011, there was massive uncertainty and fear about the future and the State’s ability to wash its own face. Talk then was of a double-dip recession at the very least, and a possible period of depression.

On the big picture things,the Coalition has achieved more than a modicum of success: exiting the bailout programme, bringing unemployment below 10 per cent, achieving growth above 4 per cent, and exceeding (comfortably) the strict deficit targets required under EU fiscal rules.

Those macro achievements have translated into surprisingly little political currency for the Coalition, and its difficulties have been in its handling of the little things. What the big print giveth, the small print taketh away.

Health services continue to encounter difficulties and budgetary shortfalls, with only a marginal improvement in waiting lists. There is no doubt that Alan Kelly brought some coherence to the approach to the Irish Water debacle but there have been ups and downs. The anti-water charges movement was damaged by videos showing froth-at-the- mouth protests against Joan Burton and Michael D Higgins. But then, as the recent bill-payment figures show, Irish Water will remain an issue right up to the election.

The controversy over Fine Gael Seanad candidate John McNulty’s appointment to the Imma board also inflicted damage on the Coalition.

More recently just as it all seems back on an even keel, one of those “little things” comes along that is as poisonous politically as strychnine – an increase in pensions for former ministers.

The needle is almost at empty in the Coalition’s goodwill tank. Too many cuts. Too many charges. Too many broken promises. Too much “feel bad”. Too little feelgood.

That said, the past political year – from summer to summer – has been better than the previous one. That would not have been hard, given the previous term saw the defeat of the Seanad referendum and poor results in the local and European elections for both Labour and Fine Gael.

The Cabinet reshuffle and the change of leadership in Labour has added some freshness to the Government, and (more critically) to its thinking.

New Ministers and new portfolios have seen the likes of Leo Varadkar, Simon Coveney, Frances Fitzgerald, Kelly and Simon Harris improve their rating with the public. Others who started badly or slowly, such as Heather Humphreys, Alex White and Jan O’Sullivan, have had better times in 2015.

The budget last October was the first in which the Government had some latitude for increased spending and tax concessions (paltry enough in the context of the cuts in the previous five years).

The passing of the same-sex marriage referendum was a rare moment when there was a decisive societal shift, and one which undoubtedly will help the liberal wings of the Coalition parties.

On a naked political level, the failure of Syriza to shift attitudes and mindsets of the other euro zone states will be presented by the Coalition as a complete vindication of its softly-softly-catchy-monkey approach.

This will be easier for Fine Gael. Its core supporters believe it is already happening.

For Labour this will be more difficult. Its supporters will need to feel the recovery not in the abstract but in a real sense in their personal lives.

The October budget will be key in determining whether this Coalition survives. That as well as a collective determination not be tripped up by any of a myriad of “little things”.