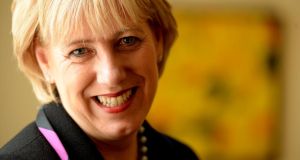 Minister for Arts, Heritage and the Gaeltacht Heather Humphreys who appointed John McNulty to the board of the Irish Museum of Modern Art in Kilmainham. Photograph: The Irish Times

John McNulty has a lot going for him. He is a 37-year old businessman with a filling station and shop in Kilcar in South West Donegal. In addition he is the manager of the local GAA senior team, a highly successful club team which has produced a few generations of magnificent McHugh brothers. Kilcar, or Cill Charthaigh, is also a breac Gaeltacht and he has been involved in an Irish-speaking initiative and is also said to have an interest in music.

However, an appreciation of the oeuvre of Alice Maher, or Sean Scully, or Joan Miró or Pablo Picasso might not be the first thing that would come to mind when referring to McNulty, who also stood unsuccessfully for Fine Gael in last May’s local elections.

A week ago the new Minister for Arts, Heritage and the Gaeltacht Heather Humphreys appointed McNulty to the board of the Irish Museum of Modern Art in Kilmainham, so that he could sit alongside such luminaries as barrister Eoin McGonigal (the chair), sculptor Rowan Gillespie, collector Emma Goltz, Dr Eimear O’Connor and former senior civil servant Julie O’Neill.

Now being an expert is not a prerequisite for being a board member of a State body or institution and people have appointed to many positions in the past who have no knowledge of the particular area but bring another life skill or experience to bear. There is the reality too of political-motivated appointments, which has not been eradicated completely by this Government but is less naked than it was several years ago.

Whatever about McNulty’s suitability for the board position (which was kept very quiet by the way) the complexion of the event changed completely when Fine Gael announced that he was also the party’s candidate for the vacancy in Seanad Eireann caused by the election of Deirdre Clune to the European Parliament.

For one, if he’s allowed stand, he will be elected. The electorate is confined to TDs and Senators and the Government has such a big majority that the outcome is inevitable.

But there was one little difficulty to surmount and this is what has landed the Government and Humphreys in such a political row.

Clune was a member of the Cultural and Educational Panel of the Seanad and her replacement would sit on that panel.

However, the nominee will have to demonstrate that they have a knowledge and practical experience in that particular area.

If you look at the nominating bodies for this panel you will see that they are associated with the legal and medical professions, the arts, literature, the Irish language and all music. Being a GAA manager and doing a bit for Gaeilge in Kilcar might not have got McNulty across the line on the panel.

So the suspicion among the Opposition is that this was a two-step stroke by Fine Gael. They appointed him to IMMA in order to give him the credentials he didn’t have. And then when nominated he could be elected without any question over his credentials. And as soon as he is elected he steps down from IMMA, only a month or so after joining the board.

It wasn’t only the opposition politicians who cried foul yesterday. There was certainly unease among the Coalition ranks in the Seanad. Senator Ivan Bacik said it created an “unfortunate perception and does not seem to be in keeping with the political reforms of the current government”.

With margins so tight in the Upper House, a vote on an amendment to bring the Minister in to explain the appointment was passed. Humphreys duly arrived and, in an appearance that does not bode at all well for her future performances as a Minister, read out a lot of blurb from an anodyne script.

When Senators asked her questions, she used the three-minutes of time to read out the stuff she had already read out.

Specifically, she refused to answer the key question as to whether or not she knew if McNulty was going to be the party’s candidate at the time she appointed him.

The Minister has also not disclosed if she or somebody else (and who might that have been?) suggested McNulty be appointed.

The panels might sound quaint and indeed they are. They were introduced by Eamon de Valera in his reformed Seanad after he drafted the 1937 Constitution with the idea that a wide spectrum of people from society be represented in the Seanad.

The idea behind them is neglected but there are still strict rules that Senators on a particular panel have to have a connection with it.

For example, Fianna Fáil Senator Thomas Byrne was refused a nomination on the agriculture panel for this Seanad because he did not have sufficient connection - he stood on the cultural and educational panel instead.

So what have we witnessed over the past week? The evidence seems to point to an old-fashioned ready-up or stroke, the kind that Fine Gael and Labour promised to eliminate when coming into office.

No plan for legislation to close meat plants in cases of Covid-19 outbreaks 16:57
Accused claimed ‘I know what it’s like to be a murderer’, trial told 16:08
Bus Éireann to shut many inter-city routes due to financial pressures 16:00
Northern Ireland reports 220 new cases of Covid-19 14:54
Gardaí want to talk to three males over alleged rape in Mayo 13:58