All incomes and taxes should be made public

Opinion: How FOI works against disclosure 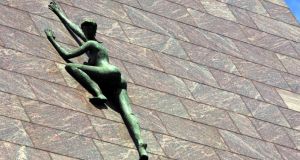 ‘This should be called The Concealment of Information Bill. And it could get worse before it is finally enacted. For instance, there is pressure to exempt information on salaries and fees paid to people engaged by Nama. It is contended “the best and the brightest” will flee the agency if there is a possibility the size of their wage packets will be disclosed.’ Above, the Treasury Building, home to Nama, in Dublin. Photograph: Eric Luke

There is a way of sorting out, at a stroke, the secretive “charities”, including the Frank Flannery lobbying payments: make them subject to the Freedom of Information (FOI) Acts. Not just in respect of dealings they have with the State or in connection with funds received from the State, but all their activities, including all payments and emoluments they make to their employees, directors, consultants, lobbyists and everyone else.

Amid the indulgent chorus of self-congratulation the Government parties have sung in the past few weeks have been the changes to the Freedom of Information regime in a Bill frozen in the Oireachtas. It is a charade.

The Bill’s purported purpose is “to enable members of the public to obtain access, to the greatest extent possible, consistent with the public interest and the right to privacy, to information in the possession of public bodies and other bodies in receipt of State funding”. The qualifications disable its effect, notably in areas that are most deserving of public scrutiny.

It empowers the relevant Minister to suppress the disclosure of any information he/she deems appropriate to suppress and to remove any body currently covered by the Act from the remit of the Act. It provides that a request may be refused if the person dealing with it thinks it involves too much bother, or thinks the request is frivolous.

The fees charged to the public for getting information and data the public owns will be lower than now apply but still prohibitive. For an internal review of a decision to refuse a FOI request, the fee will be €30 and a fee of €75 for an appeal to the Information Commissioner. But it seems from Section 27 of the Act that the fees to be charged for the actual retrieval of information might be enormous – potentially thousands of euro.


Then there are whole rafts of material

that will be exempt from disclosure. For instance, material submitted to government by any minister, or documents that in the opinion of an official “could reasonably be expected to have a serious adverse effect on the ability of the government to manage the national economy or on the financial interests of the State”.

It does not apply to the courts of justice, where, according to the Constitution, justice must be administered “in public”. Why is there not a public entitlement to every single document that is “opened” (ie disclosed) in court, unless the hearing is in camera?


We were promised the National Asset Management Agency

, which operates in obsessive secrecy and manages a portfolio of publicly owned assets worth more than €20 billion, would be included in the FOI regime. But this new Bill exempts almost all documents of interest Nama possesses.

It should be called the Concealment of Information Bill. And it could get worse before it is finally enacted. For instance, there is pressure to exempt information on salaries and fees paid to people engaged by Nama. It is contended “the best and the brightest” will flee Nama if there is a possibility the size of their wages will be disclosed.

If we had a vivid sense of ourselves as social beings, living interdependent lives, on the basis of equality and respect, we might perceive these matters differently. We might have a stronger sense that what is involved here is “our” information.

Minister for Transport, Tourism and Sport Leo Varadkar has expressed concern about the intrusion involved in requiring the disclosure of the salaries of public officials. He believes this is a realm of privacy that should be protected. But how is it a private matter what someone gets from the public purse? Why should those who pay the piper not know how much the piper is paid?

But there is a more general and more serious point.

Since all wealth and income comes from our interdependence in society, society should know how that interdependently generated income and wealth is distributed. So freedom of information should include what each of us gets paid and what we pay back in taxes. There is no privacy entitlement for reward that is publicly created. This disclosure should apply not just to those in Rehab and other charities but to all of us.

This is not some communist ploy to destroy private enterprise. It was first suggested here by one of the loudest and most persistent cheerleaders of private enterprise, Michael McDowell, who proposed that, annually, the Revenue Commissioners should publish a directory of everyone’s income and taxes!

The origin of that proposal should carry some weight with the ideological bedfellows of Michael McDowell: Fine Gael and the Labour Party.