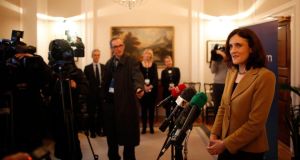 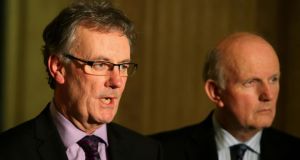 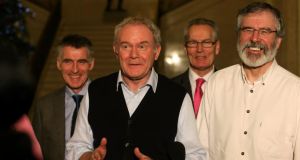 The Irish and British governments and the five Northern Executive parties have concluded an agreement that Minister for Foreign Affairs Charlie Flanagan said signals “brighter days” for Northern Ireland and Ireland generally.

After 26 hours of continuous talks the North’s five main parties effectively endorsed a 14-page 75-point deal on Tuesday afternoon called the Stormont House Agreement that addresses disputed matters such as agreeing a budget and welfare reform, dealing with the legacy of the Troubles, and parades, flags and emblems.

Among its proposals the agreement provides £150 million (€192m) to support survivors and victims of the Troubles and to deal with conflict-related killings; £500 million to support cross-community projects such as shared education; and £700 million to reform the public sector and fund thousands of predicted redundancies.

The deal involves all the parties, including Sinn Féin, signing up to welfare reform, which it had trenchantly opposed.

The DUP First Minister Peter Robinson and the Sinn Féin Deputy First Minister Martin McGuinness made clear they would endorse the document and while varying degrees of reservations were expressed by the SDLP, the Ulster Unionist Party and Alliance they too indicated a willingness to acquiesce to the proposals.

“On one of the darkest days in the bleak midwinter we have forged a broad agreement that will undoubtedly give rise to brighter days in Belfast and throughout Northern Ireland and indeed throughout the island of Ireland,” said Mr Flanagan.

Mr Robinson said the deal was a “monumental step forward” and would be beneficial for the people of Northern Ireland.

“Of course every one of us would have liked to have had a more comprehensive and complete agreement but this is as much and more than we have ever been able to do on these issues in the past,” he said. “So it is a very significant agreement”.

Mr McGuinness said the deal had the potential to give the Executive a “fresh start”, an opportunity that would be seized with “both hands”.

Irish talks team joined by Martin McGuinness and Gerry Adams who opts for a selfie. pic.twitter.com/WBdOqN6oLe

The Sinn Féin president Gerry Adams in an apparent reference to the omission of such issues as an Irish language act and an independent inquiry into the murder of Belfast solicitor Pat Finucane said there was still progress to be made. But said, “There are aspects we can be proud of – it’s a good day.”

Said Ms Villiers of the agreement, “It offers us a new start, and a far more hopeful future. But it will need continued hard work to ensure it fulfils its promise. For our part, we shall do all we can to see that that happens.”

Northern Secretary Theresa Villiers said that the British government could now press ahead with its commitment to devolve corporation-tax setting powers to the Northern Executive.

The breakthrough was achieved following continuous negotiations that began at 12 noon on Monday and ended around 2pm on Tuesday at Stormont House on the Stormont estate.

While politicians were tired the overall mood was positive. This was reflected in some humorous tweets such as one from former SDLP leader Mark Durkan, which featured a breakfast picture, and the caption that the talks were now about “croissant the teas”.

But there was also frustration that it had taken so long for the two governments to produce their heads of agreement paper this morning on what could constitute a deal. Former Ulster Unionist Party leader Tom Elliott tweeted, “Such a shambles – told government paper would be ready at 1am, then it was 2am, then 3am, it’s now 7am and still waiting and waiting.”

Ms Villiers was in regular contact with Downing Street and the British Treasury through Monday and Tuesday with the parties adopting a united stance in seeking £2 billion in grants and loan-raising powers to sign up to the deal.

Last Friday week British prime minister David Cameron proposed what he said was a £1 billion package. The five parties rejected his offer, saying it largely amounted to the Executive having additional loan-raising powers. They in turn sought a £2 billion package with Mr Cameron on Monday responding with a £1.5 billion proposal.

But by yesterday afternoon Mr Cameron decided to increase his offer to almost £2 billion which was sufficient to prompt the parties to sign off on the deal, notwithstanding some concerns that the agreement was not more comprehensive.

Mr Cameron said he was delighted a workable agreement had been reached. It could “allow Northern Ireland to enjoy a brighter, more prosperous future, while at the same time finally being able to deal with its past,” he said.

“This agreement means the UK Government has been able to offer a significant financial package that opens the way for more prosperity, stability and economic security for Northern Ireland. And it means the parties can now genuinely begin to overcome the key outstanding issues which have been unresolved since the Belfast Agreement.”

Key proposals include: l The creation of a Historical Investigations Unit to inquire into killings of the Troubles. l A commission to enable people to privately learn how their loved ones were killed. l The creation of an oral history archive where experiences of the conflict could be shared. l A commission to report on flags within 18 months of being established. l Devolving responsibility for parades from the Parades Commission to the Northern Assembly. l Cutting the size of the Northern Assembly from 108 to 90 members by the 2021 Assembly elections. l Reducing the Executive departments from 12 to nine by the 2016 Assembly elections. l The potential to create a formal opposition at Stormont.