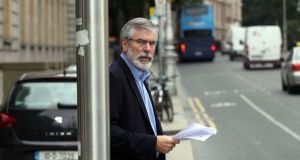 Sinn Féin leader Gerry Adams has said the appointment of Theresa May as British prime minister will present difficulties to the peace process and Anglo-Irish relations.

Mr Adams said Ms May’s predecessor David Cameron had not fulfilled his obligations under the Belfast Agreement, the Stormont Agreement, or the Fresh Start Agreement.

“I have argued that the (Irish Government) needs a consistent strategic view and a programme to deal with the British government,” he said in Dublin. “I regret to say the focus has not been there.”

Mr Adams said he wanted a border poll - in other words a referendum on Irish unity - as part of the response.

Asked about Ms May’s comments that it was “inconceivable” that the ‘invisible’ border between Ireland and Britain would be unaffected by Brexit, Mr Adams that is why he said there would be considerable challenges and there should be a big effort by the Irish Government and others to minimise the huge consequences.

Asked about the internal debate within Fine Gael over its future leadership direction, Mr Adams said it was entirely a matter for Fine Gael.

He contended, however, the Government did not have any authority, dependent as it was on Fianna Fáil. He said another election was the only solution.

On the July 12th celebrations in the North, Mr Adams also said that some of the bonfires that were lit were bigger than buildings and used effigies of republicans that were offensive.

He said that cases had been taken under incitement to hatred legislation.

“There was an effigy of me hanging from a noose (used) for a bonfire… That was not good for kids.”

He said that rural Orangemen were discommoded and embarrassed by some of the more offensive bonfires. He also said the PSNI had a responsibility in this regard.