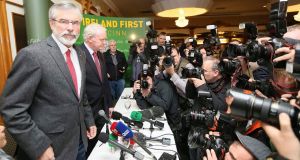 Sinn Féin president Gerry Adams arrives at a news conference in Belfast after he was released from police detention tonight. Photograph: Paul Hackett/Reuters)

Gerry Adams has restated he is innocent of involvement in the killing of Jean McConville and insisted that Sinn Fein support for the Belfast Agreement is unshakeable.

Addressing a packed press conference in west Belfast following his release from Antrim PSNI base, the Sinn Féin president, strongly criticised his arrest and accused the “old guard” in policing of using “the old methods”. There was no basis for any criminal charge against him, he said.

Accompanied by the leadership of the party including Martin McGuinness, Mary Lou McDonald and a host of Assembly members, MPs and TDs, he insisted he stands by the Belfast Agreement but added he never dissociated himself from the IRA and never will.

However he insisted the IRA had left the stage. “It is gone, it is finished,” he said.

The arrest was badly handled and those who ordered it should have done differently, he said. But he added he “bears no animosity to anyone” after four days detention.

Asked for his response to trenchant criticisms by Peter Robinson of his stance on policing, Mr Adams declined to hit back, insisting instead that Sinn Fein would continue to work with the DUP at Stormont regardless of the problems.

Earlier, Mr Adams has left Antrim police station by a rear exit as loyalists protested outside the building following his release from custody after four days of questioning over the murder of Jean McConville.

But Mr Adams exited the station through another gate while the heated scenes unfolded.

A file will be sent to prosecutors by detectives who have questioned him over the murder of the Belfast mother of 10 in 1972.

The move means the ultimate decision whether to charge the 65-year-old with any offence will be made by Northern Ireland’s Public Prosecution Service (PPS) at a later date after reviewing evidence presented by police.

Mr Adams has always vehemently denied allegations levelled by former republican colleagues that he ordered the murder of the 37-year-old widow.

The Sinn Féin president was scheduled to hold a press conference in a hotel at 8pm.

Earlier, a senior member of the party said Mr Adams was “worried about the damage” his arrest may be doing to the image of policing” and to the peace process.

MLA Gerry Kelly, who visited the party president in custody at Antrim police station this afternoon, said the arrest and questioning of Mr Adams over the IRA murder and secret burial of Jean McConville 42 years ago was “quite a serious situation”.

His remarks followed a barrage of protest from unionists and others following Martin McGuinness’s claims that the detention of Mr Adams would force republicans to reconsider their support for the police.

Speaking to reporters outside the PSNI serious crime suite in Antrim earlier, Mr Kelly said Mr Adams was “looking well and being treated well” and he thanked supporters for their solidarity.

Northern Ireland’s First Minister Peter Robinsonaccused Sinn Féin of attempting to blackmail the police over the arrest of Mr Adams.

The DUP leader accused republicans of using “bullyboy tactics” against the PSNI in the wake of Mr Adams’s arrest on Wednesday. In a statement this morning, he said Sinn Féin has “crossed the line” and should cease its behaviour.

Amid a growing row over the arrest, the North’s Deputy First Minister Martin McGuinness said he believed it was part of an attempt by some police officers to settle old scores.

Mr McGuinness blamed an “embittered rump” left over from before the reform of policing whom he claimed wanted to destroy the peace process.

Addressing a rally yesterday in the nationalist Falls Road, he said: “These people want to settle old scores whatever the political cost.”

Today, Mr McGuinness said he believed there would be “huge unease” among all those who negotiated the Belfast Agreement, including the US government, if Mr Adams were to face charges in the case.

He said it would represent “a very serious departure” from the process that had been pursued.

This morning Mr Robinson issued a statement saying: “The PSNI must not be the subject of republican bullyboy tactics. They must be completely free to follow any and all evidence regardless of where it takes them and to decide free of political considerations whether suspects will be charged or not.

“The hive of activity to pressurise the police from charging Adams is obscene politicising of the policing process.

“I warn Sinn Féin that they have crossed the line and should immediately cease this destructive behaviour.”

On Friday a judge allowed the Police Service of Northern Ireland (PSNI) a further 48 hours to hold Mr Adams at Antrim police station. Sinn Féin has warned it will review its support for the police if the leader is charged.

The 65-year-old detainee vehemently denies allegations levelled by former republican colleagues that he ordered Mrs McConville’s murder and secret burial more than 40 years ago after she was wrongly accused of passing information to the security forces.

Mr Adams voluntarily presented himself for interview by prior arrangement with detectives.

Sinn Féin’s decision to sign up to support the police in 2007 was viewed as a major milestone in the peace process and prompted the return to devolved rule at Stormont, with the republican party and the Democratic Unionists entering government together.

Mr Robinson, Justice Minister David Ford and Northern Ireland Secretary Theresa Villiers have defended the police’s handling of the arrest and denied the action was politically motivated and designed to undermine Sinn Féin ahead of the forthcoming European elections.

Mrs McConville was abducted from the Divis flats in west Belfast by a gang of up to 12 men and women after being wrongly accused of informing to the security forces.

She was interrogated, shot in the back of the head and then secretly buried - becoming one of the ‘Disappeared’ victims of the Troubles. Her body was not found until 2003 on a beach in Co Louth, 50 miles from her home.

In March Ivor Bell (77), an IRA leader in the 1970s, was charged with aiding and abetting the murder of Mrs McConville.

The case against him is based on an interview he allegedly gave to researchers at Boston College in the US.

The Boston College tapes are a series of interviews with former loyalist and republican paramilitaries, designed to be an oral history of the Troubles.

The paramilitaries were told the tapes would only be made public after their deaths. However, after a series of court cases in the United States, some content has been handed to police.

At least one interviewee implicated Mr Adams in the murder of Ms McConville but he has always strenuously denied any involvement.