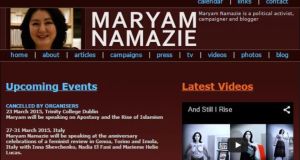 An image from Maryam Namazie’s website with a claim that Monday’s speech at Trinity College Dublin on apostasy and the rise of Islam has been “cancelled by organisers”.

A political activist due to give a speech in Trinity college on apostasy and the rise of Islam has claimed the event has been cancelled after the college tried to attach conditions to it.

Maryam Namazie was due to give a speech at the Society for International Affairs on Monday, March 23rd.

In a blog posted on Friday, Ms Namazie claimed the society feared the event could be one-sided and that it had taken advice from college security on imposing certain conditions.

“I’ve just been informed...that college security (why security?) has claimed that the event would show the college is ‘one-sided’ and would be ‘antagonising’ to ‘Muslim students’; they threatened to cancel my talk,” the blog post read.

Ms Namazie wrote that, after consultation with college management, Trinity College Dublin would let the event proceed, subject to conditions. “All attendants of the event must be 1) Trinity students and 2) members of the society hosting the talk.

“For ‘balance’, they require that a moderator host the event; Prof. Andrew Pierce of the Irish School of Ecumenics has kindly agreed to do so.”

Ms Namazie wrote she would not do the talk subject to the conditions, “particularly since such conditions are not usually placed on other speakers”.

“It is crucial that I be able to speak against Islamist fascism and honour our dissenters deemed apostates, blasphemers, heretics… whether ex-Muslims, Muslims or non-Muslims,” she wrote.

Ms Namazie told The Irish Times she was contacted by the student society Sofia on Friday night about the impending event after college security raised concerns with the society.

“I said I would come as planned if the conditions are removed but the society then started defending the conditions. The Facebook page which announced my talk, has been removed.”

“After security at the college contacted the society about the event, these conditions were put in place. Prior to that it was meant to be an event that was open to the public.

“The two conditions were that the event would only be open to the students of the college and this was meant to be an open meeting, like previous meetings in Trinity.”

“The second condition was that I would have someone moderate my talk. This has happened to me before; it’s having someone there to ensure what they call impartiality.”

“One of the things college security told the student organisers is that they didn’t want to give the impression that Trinity was one-sided or antagonise the so-called Muslim students.”

She alleged these questions were not raised with Islamist speakers. “I call them Islamist, not Muslim, because they are a political movement organising on university campuses.

“An Islamist speaker was invited last month and he has explained why apostates should get the death penalty. He has explained why there is the punishment of stoning for adultery and so forth. None of these conditions were put on him.

“The Islamist movement has been seen to be one and the same with Muslims - and that’s not the case. Muslims are not a homogenous group.”

Ms Namazie said she is from a Muslim background, but stopped practising the religion several years ago.

“Because of the conflation between Muslims and Islamists, if you criticise the Islamist movement, which is a far right political movement, it is often seen to be an attack on Muslims or an act of racism - and this is not the case.

“For instance, if you criticise the English Defence League, you’re not attacking the English so it’s not the same thing.”

“Why is it when it comes to those of us who are victims of the Islamist views, there needs to be balanced and another point of view? How come the same requirement isn’t made of Islamist speakers?”

Ms Namazie said she did not know why Trinity felt the need to moderate her talk when she is “not the one inciting hatred”.

Ms Namazie said she could not understand how college security viewed the talk as being potentially antagonistic to Muslims.

“Why is defending the right of people not to be killed seen as antagonistic and why is it seen as one-sided to defend human rights?”

She said she must be allowedly speak without restriction, and wants to come to Ireland to give her talk if she is allowed to do so without conditions attached.

Ms Namazie is the spokesperson for One Law for All Campaign against Sharia Law in Britain and the Council of Ex-Muslims of Britain.

In February, preacher Sheikh Kamal El Mekki delivered a lecture on the prophet Muhammad in an event co-hosted by the TCD Muslim Student Association (MSA) and the Irish branch of the AlMaghrib Institute.

Ms Namazie said she should be able to do the talk because conditions were not placed on Mr El Mekki’s talk.

“No conditions were placed on his talk and security did not threaten to cancel the event nor inform the association that the speakers’ position on death for apostates would ‘antagonise’ ex-Muslim and Muslim students who do not support apostasy laws.”

Ms Namazie wrote in the blog post: “This is beyond outrageous, given the social and political reality where apostasy from Islam is punishable by death in 11 countries and especially at a time when it has come to light that British Islamists are executing apostates for Isis after having been ‘radicalised’ in British universities.

“Also, it does a disservice to the many Muslims who oppose Islamism and apostasy laws by conflating ‘Muslim’ students with Islamism or the religious-right.”

A spokeswoman for Trinity College Dublin said the event was organised by the student run Society for International Affairs (SOFIA) and the college had no involvement in the discussions.

“It is quite normal for society events to be restricted to members, particularly where there is a ‘high profile’ speaker involved,” the spokeswoman added.

A statement issued by SOFIA to its members said it regrests that Ms Namazie will not be addressing the society on Monday night.

“The invitation that had been extended to Ms Namazie to speak in the College was not originally put forward by this society but by an individual in College. Individuals may not organize such meetings in College and when this became apparent to the person an approach to SOFIA was made to take over as host organisation.

“Whilst some debate took place as to whether the society might do so, because of other commitments in the week during which the visit was to take place, the society’s name was eventually put to the event.

“Subsequently it would appear that the original instigator of the invitation had led Ms Namazie to believe that she was speaking at a public meeting within the University. When in contact with Ms Namazie the society corrected these misapprehensions – as the society does not organize meetings on College property for the general public and instead organises meetings for the membership of the society. The society had also asked another speaker for the event which it is entitled to do but had not been part of the initial individual’s invitation.

“Ms Maryam Namazie has decided to withdraw from the event and her demands that the society change its practices cannot be met.

“The society is disappointed with Ms Nawazie’s decision and understands her reason for withdrawing from the event, insofar as she believed that she had been invited under different circumstances.

“The primary responsibilities of the society are to its membership and its constitution and we, the committee, are sending this notification to you so that the society’s membership may be informed of what has happened.”