Anne Enright: Personal stories are precious things and they made the difference

‘How did we turn ourselves from fallen women into women rising? By telling the truth. It was that simple’ 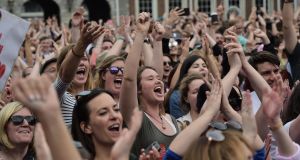 Yes voters celebrate as the result of the Irish referendum on the Eighth Amendment is declared at Dublin Castle. Photograph: Charles McQuillan/Getty Images

The Eighth Amendment was always a failure - medical, practically, geographically - the only thing it did was make people’s lives worse.

Seventy five per cent of voters knew their mind before the campaign began, according to exit polling on Friday. Some would vote for pragmatic reasons, some for sympathetic ones, more than three quarters said they were influenced by personal stories they had heard in the media or from people they knew.

Personal stories are precious things. To speak can be to suffer twice, especially if you do not know how your story will be heard. People do need to speak, however. They know that if they tell it true, if their story is accurate to the experience, emotionally honest, unafraid of its own contradictions, then something else happens. A story of hurt becomes one of healing.

Apart from a few mighty souls who put their names out into the public domain, most of the women remained anonymous. There were good reasons for this. The women who shared their stories of travelling for abortion in England were subjected to hatred and misogyny, vilified and trolled.

By remaining faceless, however, the woman who tells her story becomes Everywoman. She tells a story of inconvenience, difficulty, or outright tragedy and she is made, by her words, powerful. By shaping it in words, a woman possesses an experience that might have possessed her. Making stories brings us outside our own lives and enlarges the experience of our readers. Fellow feeling is a wonderful thing and sympathy works close to joy. These careful accounts, so beautifully told, were the redemptive heart of the Yes campaign.

The troll, on the other hand, has no experience to offer. The troll has abuse, blame, hatred, glee. The religious right had some stories, but mostly they had beliefs, many of them high minded. The women who travelled continued to have a story first, an opinion second, a belief last of all.

The anti-abortion campaign relied more heavily than the Yes side on visual imagery, a tactic that seemed to backfire. The placing of No posters outside or near maternity hospitals caused a wave of sympathy for women experiencing miscarriage, as if those on the No side were against those women too. If the argument was over the interior of a woman’s body, that interior looked wrong up on a telegraph pole. It seems the feelings we have about foetuses are not natural and immediate, they are strange and, in any pregnancy, slow to form, so these images did not make us feel, for the most part, protective and warm. Pictures of aborted foetuses, meanwhile, made people feel simply assaulted and voters pushed back these mental intrusions with facts.

Voters are notorious for going with their gut and not their brain but the No side kicked us in the gut, which made their inaccuracies more galling. People were thinking hard during this campaign, they were making up their minds. The No side was increasingly represented as not just untrustworthy, but also as ghoulish and disordered. Their transcendent, nostalgic and sometimes beautiful sense of belief was also trolled by those who disagreed with them.

It was the heart that won - not the gut and not the brain. It was the stories that made the difference. If you look at the breakdown by age of those who voted, the oldest generation, which was the most conservative, was one in which this kind of speech was almost impossible - these women might as well have been mute. In my own age-bracket of 50-65 the ability to speak was damaged by the successive hurts of 1983 and 2002 and the push for personal abortion stories became a kind of oppression in itself. Why should we be obliged to relate personal experience instead of discussing public policy, as men could - and what if you had no experience to share? I saw many conversations falter and become impossible as the question of who had, or had not, taken the trip to Britain formed somehow in the ether. Every time a woman spoke about the question of abortion she was turned, slowly or quickly, by the listener or by herself, into someone who could be penetrated and impregnated, into a physical, and a physically helpless, thing.

How did we turn ourselves from fallen women into women rising? By telling the truth. It was that simple. Women like Tara Flynn and Róisín Ingle, who are now in their forties, spoke publicly, took the hit and brought the discussion home. I want to ask people ‘What age were you in 1983’ as if that is what makes the difference. Better again, I want to celebrate those women, younger still, who have shifted beyond the personal into discussions of public policy, as though discussing public policy was a simple, easy, natural thing to do.