Having cracked the whip successfully, danger is Enda Kenny could lose the run of himself 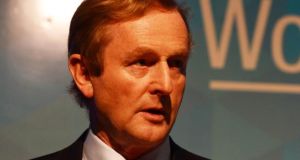 Enda Kenny’s iron-fisted approach to party discipline on the abortion issue may not do much for his popularity, but it has enabled him to achieve something that all of his predecessors since 1992 have failed to do.

Successive taoisigh have either had their solutions to the problem created by the X case judgment rejected by the people in referendums, or have opted out of dealing with it through legislation for fear of the political consequences.

It is almost certainly true, as Senator Paul Bradford suggested in the Seanad during the week, that Fine Gael would not have gone down the legislative route were it not for the pressure from the Labour Party.

The other side of the coin is that the legislation would not have been nearly as restrictive if Labour had its own way. The Bill that ultimately emerged was part of the give and take between the parties that takes place in a coalition that is working.

Once the Government made the decision to legislate, Kenny was determined to avoid repeating the Fine Gael mistakes in dealing with the abortion issue in the 1980s, which did enormous damage to the party and to the government led by Garret FitzGerald.

A complex wrangle over the wording of the constitutional amendment in 1983 led to a relaxation of the whip and a three-way split in the party. It put all of the Fine Gael TDs of the day under enormous pressure from committed anti-abortion campaigners, and Kenny rightly calculated that any wavering this time would produce a similar result.

Bad 1980s experience
Over the past few months, the Taoiseach has regularly referred back to his dreadful experience in the 1980s during parliamentary party meetings. He told his TDs that it was something he would not allow happen again, 30 years on, and it accounted for his determination to impose the whip and insist on strict disciplinary action against anyone who broke it.

The 1980s experience was not only traumatic for Fine Gael as a party. The loss of authority that ensued helped to undermine the capacity of the FitzGerald government to get to grips with the economic crisis facing the country.

Now, as then, the economy is the dominating issue facing the Government, and Kenny was anxious to avoid both a deep internal split in Fine Gael and a row with his Coalition partner that could have undermined their capacity to deal with it.

The level of effort required to bring his party with him in the first instance and then get the Protection of Life During Pregnancy Bill through the Dáil was enormous. Just a few months ago, there were widespread predictions in the media that at least 20 members of the Fine Gael parliamentary party would not support the legislation in any circumstances.

In the end, five TDs, one a high-profile junior minister, and two Senators went overboard to join Roscommon TD Denis Naughten who voted against the Government two years ago over his local hospital. It was a painful process for all of them and for the party, but not nearly as divisive as it might have been.

The danger facing Kenny now is that, having cracked the whip successfully on this issue, he could lose the run of himself. The haste with which rebel Fine Gael Senators were thrown off committees yesterday provoked a rancorous and unnecessary row in the Seanad. Overindulgence in such tactics could store up serious trouble in the long term.

Still, the remarkable aspect of the whole episode is that Fine Gael, the party that spent most of its lifetime in Opposition, has, under Kenny’s leadership, turned into a ruthless political force that has wielded power effectively since taking office.

The very opposite has happened in Fianna Fáil, which was almost perpetually in power between 1932 and 2011. The party appeared to be gradually recovering ground after the trauma of the election meltdown two years ago but the abortion issue has raised fresh doubts about its capacity to recover.

The decision of Fianna Fáil to allow a free vote on the legislation, the first time it has ever done so in its history, was a sign that party leader Micheál Martin was unable to bring all his troops with him in support of the Bill.

Some made it clear they would in conscience have to defy a party whip and, given that they have only 19 Dáil deputies, that would have been catastrophic.

Martin and his health spokesman, Billy Kelleher, shared Kenny’s analysis of the restrictive nature of the Bill but they clearly calculated that by supporting the legislation they would put the party in tune with the mood of the electorate.

The real shock was not that some Fianna Fáil TDs voted against the Bill in opposition to their leader, but that almost three-quarters of them did so. As if that was not bad enough, Martin had to disown some of his own Senators for the graphic language they used about abortion during the debate in the Upper House. All that was achieved by the use of such offensive tactics was to undermine the argument for the retention of the Seanad.

FF’s ignored leader
Martin now faces a considerable task in trying to restore his authority. His problem is not so much with those who had genuine conscientious objections to the Bill but that so many others ignored his leadership and jumped on the bandwagon for their own political considerations.

Normally it is the Government parties who long for the Dáil summer recess but this time Fianna Fáil needs it every bit as much. The break won’t change the problems facing the party but the leader will be hoping the political agenda will have moved on by the time the House resumes on September 18th.