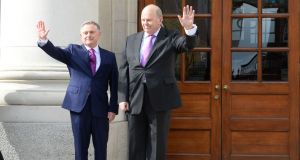 Ireland’s plan to abolish the ‘double-Irish’ shows the EU’s decision to push the tax evasion agenda “provides good results,” the EU Commissioner for Taxation has said.

Speaking following a meeting of EU finance ministers yesterday afternoon in Luxembourg, Algirdas Semeta said the commission welcomed Minister for Finance Michael Noonan’s announcement the tax device would be closed to new entrants from 2015 and phased out for existing recipients by 2020.

“Of course, we at the commission will have to look at the detail and how it will work in practice but the intention I think is a very good one,” Mr Semeta said.

“It also explain how that it is important that (when) we push this agenda to fight against tax fraud and evasion and avoidance as hard as possible...that provides good results, be it at European level or be it at national level.”

Patent boxes are tax devices which allow countries to offer low tax rates on profits derived from intellectual property activity, and are separate to R & D tax break schemes. Britain was one of the most recent countries to introduce patent boxes, announcing the measure in its budget for 2013.

Though technically legal, the European Commission is investigating the use of such devices in a number of EU member states, including Britain, France and Belgium, to check their compliance with state-aid rules.

Mr Semeta said that, once the commission’s assessment was completed - potentially by the end of the year - member states were free to make their own decisions.

“They are not wrong per se, but it is important that they comply with these fair competition rules,” he added. “One has to be very, very careful in designing corporate tax (systems) in order to avoid a situation that creates a pure system of profit shifting.”

Earlier this year, the European Commission confirmed it has sought information from nine member states - Belgium; Spain; France; Hungary; Luxembourg; the Netherlands; the UK; Cyprus and Malta - about their intellectual property taxation regimes.

The commission’s anti-trust arm also initiated formal investigations into Ireland, the Netherlands and Luxembourg over specific tax rulings offered to companies. Pressure from the EU is widely believed to have contributed to the decision to end the ‘double Irish’.

EU finance ministers also agreed yesterday to back new rules on the automatic exchange of information on bank accounts, though Austria was given an extra year to comply if needed.

The legislation, which will come into effect by January 1st, 2017, is an update of the savings tax directive agreed in March.

Countries including Luxembourg and Austria have been facing increasing EU pressure to relax their bank secrecy laws, as Brussels attempt to clamp down on individual tax evasion.

The new rules will require banks to disclose details of accounts of customers who do not reside in the state in which the accounts are held. The EU is in negotiations with Switzerland; Lichtenstein; Andorra; San Marino and Monaco about implementing similar rules.