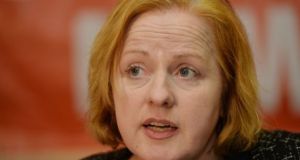 A Bill to repeal the Eighth Amendment, which bans abortion procedures unless the mother’s life is at risk, was launched in Dublin by the Anti-Austerity Alliance-People Before Profit today, and will be debated by the Dáil this Autumn.

The Bill would go further than a separate Bill introduced by Independent TD Mick Wallace which would allow for abortion in cases of fatal foetal abnormalities. That will be debated by the Dáil next week.

AAA-PBP TD Ruth Coppinger said their Bill is straightforward. It “calls for a referendum to be held to repeal the Eighth Amendment to the Constitution and allow the Dáil to then legislate for abortion services in Ireland”.

If passed, it would provide for a referendum to delete article 40.3.3 of the Constitution, which was introduced in 1983 and guaranteed the equal right to life of the unborn and the mother.

The AAA-PBP launched the Bill on Wednesday morning at a press conference attended by representatives of other pro-choice groups. Ms Coppinger said that AAA TDs intend to move the first stage this week and place it in their next available private members time in the Autumn.

She said that the lead-in time before the Bill comes to the floor of the Dáil for debate would be used by activists to “lobby and pressure TDs” to support the measure.

Bríd Smith said that the Taoiseach’s efforts to find a consensus on the issue through a citizen’s assembly were “nonsensical”.

“There isn’t a consensus on the eighth amendment. Either it’s repealed or it isn’t,” she said.

Meanwhile, the legislation introduced by Mr Wallace will be debated in the Dáil next week. A number of independent Ministers have sought a free vote on the matter.