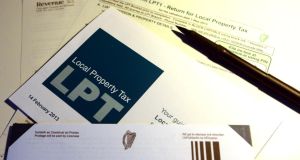 Some 65,000 owners signed up between mid-morning and 5pm yesterday while a further 100,000 signed up over the weekend

The deadline for property tax registrations falls due at midnight tonight with as many as 400,000 property owners facing mandatory deductions of the tax if they do not make returns to the Revenue on time.

Amid signs of a last-minute rush to complete registrations with the tax authority, the Revenue said 1.265 million returns had been submitted by close of business yesterday as property owners dashed to meet the deadline.

Some 65,000 owners signed up between mid-morning and 5pm yesterday while a further 100,000 signed up over the weekend, a Revenue spokeswoman indicated.

Registrations to date point to a compliance rate of some 76 per cent of the 1.66 million tax notifications the Revenue sent to owners. This has prompted some relief in Government circles that a clear majority of property owners have registered with the Revenue.

Compliance level
Revenue chairwoman Josephine Feehily is on record as saying she would be disappointed if the tax authority did not achieve a compliance level of “several percentage points north of 80 per cent” by the end of the year.

The Revenue helpline – 1890 200 255 – will be open from 8am today until midnight and the revenue.ie website is open for online registrations.

The Revenue has warned for months that it will deduct the tax from the salaries or pensions of property owners from July if they do not register.

The recipients of other Government payments also face mandatory deductions and self-employed evaders or companies will have to pay a late filing surcharge on income tax or corporation tax returns.

Revenue has also reserved the right to deduct the tax from the bank accounts of evaders or to refer their case to a sheriff or solicitor for collection. An annual interest charge of 8 per cent per applies to late payments.

Opposition
The tax has been opposed by mainly left-wing campaigners, who argue that it is an unfair imposition on ordinary people.

A spokeswoman for the campaign against the tax, Ruth Coppinger, challenged Revenue’s assertion that payment was “inevitable” in light of the provisions for mandatory deduction which are built into the system.

“People can and will choose to take part in a boycott as a way of exerting political pressure on the Government,” Ms Coppinger said.

“Hundreds of thousands are likely to take part in an organised boycott of this unjust bondholder tax. Many have simply decided they have no more to give.”

Under close scrutiny in coming days will be the extent to which the eventual shortfall from the 1.66 million notifications can be attributed to evasion or to flaws within Revenue’s database on property and its owners.