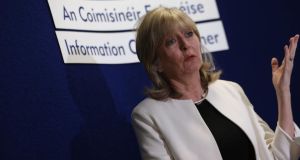 Ombudsman Emily O’Reilly has called for more light to be shone on allegations that elite Garda officers colluded with a convicted drug trafficker.

Ms O’Reilly said the public has been left “really puzzled” by the lack of details about the Kieran Boylan case. “I personally don’t feel that as yet there has been a full expose of all the issues involved, within the media,” she said.

Last week, the independent watchdog responsible for investigating Garda wrong-doing launched an astonishing attack on the force, accusing it of withholding vital evidence from its inquiry into the affair.

The Garda Síochána Ombudsman Commission (Gsoc) probed claims a specialist unit within the force turned a blind-eye to Boylan’s drug dealing in exchange for information on other dealers.

The watchdog said its four year inquiry into why serious drug trafficking charges against Boylan were suddenly dropped without any explanation in 2008 was hampered and delayed by a lack of co-operation.

Ms O’Reilly, who is responsible for investigating complaints against public bodies but not the Garda, said there was an onus on all involved in the case to give more clarity about what exactly happened.

“Because they are very, very important matters,” she said.

“Obviously we have to take Gsoc seriously. Clearly we also have to take the Gardaí and the Department of Justice seriously as well, but I just feel, as a citizen, that we haven’t got to the nub of it yet.

“I think a lot of people are really puzzled as to where the truth lies in relation to this, and I think the media has a responsibility, actually, to perhaps dig a little deeper into this for the sake of clarity for the public.”

Ms O’Reilly made the remarks while launching her annual report.

Boylan was at the centre of a serious drugs case until July 2008 when charges were dropped, suddenly and without explanation. They related to the seizure of heroin and cocaine worth €1.7 million at a truckers’ yard in Ardee, Co Louth, by the Garda National Drugs Unit in October 2005. He had been on bail at the time after being charged with possession of cocaine and heroin in 2003 and was later jailed for five years for that offence.

Gsoc investigators made 63 requests for information — only 17 were handed over in an agreed three month time frame; six took more than a year and one piece of evidence has not been received.

A file was sent to the Director of Public Prosecutions, who decided no prosecutions would be brought. No gardaí have been disciplined to date.

The case has sparked a row between the watchdog and Garda Commissioner Martin Callinan, with Justice Minister Alan Shatter intervening to broker a meeting between both sides.

Pandemic halves the value of venture capital deals in third quarter 04:30
Ireland has one of the lowest breastfeeding rates in the world – report 04:01
Brexit to curb services trade with UK, accountants group warns 04:00
Brexit and Covid force consumer sentiment to lowest level 04:00
Tourists and renters to be permitted in student accommodation 03:51