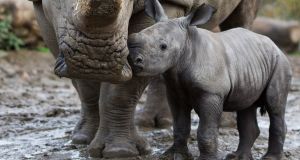 Dublin Zoo welcomed the latest addition to its African Plains section with the birth of a male southern white rhinoceros calf named Chaka on Sunday.

Weighing 50kg, Chaka joins a herd of six rhinos in the enclosure and is said to be settling in well to his new surrounds. He was born to mother Nyala and father, also named Chaka, and is expected to reach a weight of up to 3,600kg in adulthood.

White rhinos are an endangered species in the wild where there are currently about 20,000 in existence, mainly spread across South Africa, Zimbabwe, Namibia and Kenya.

The animals continue to be targeted by poachers, and are prized for their horns.

Dublin Zoo is involved in the European Endangered Species Programme which aims to assist the survival of the southern white rhinoceros, and also supports the work of African conservation organisation Lowveld Rhino Trust.

“The newest addition to the herd is Nyala’s first calf, which is very special and she has taken to motherhood extremely well. The calf is healthy, strong, feeding well and full of life already,” she added.