Trump retweets praise for Ivanka from UK instead of daughter 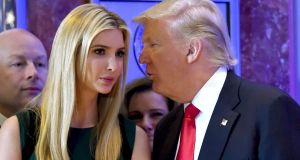 US President-elect Donald Trump with his daughter Ivanka at a press conference last week. Photograph: Timothy A Clary/AFP 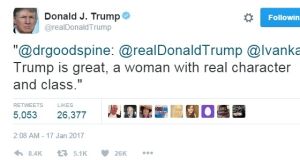 A digital consultant from Brighton, whom Donald Trump mistook on Twitter for his own daughter, has urged the president-elect to face up to his responsibilities and learn more about climate change.

Trump quoted a praiseworthy tweet directed to him by Lawrence Goodstein, a Twitter user in Seekonk, Massachusetts, that described his daughter Ivanka as “a woman with real character and class” late on Monday.

But Goodstein had mistakenly put @Ivanka, not @IvankaTrump - not a significant mistake in light of Goodstein’s 160-odd followers, but of far greater consequence circulated by Trump to his 20.1 million.

So Trump’s shout-out was instead directed to Ivanka Majic, a council worker from Brighton, England, who used to work for the opposition Labour party, whose number of Twitter followers doubled overnight.

Majic has taken advantage of her moment on the global stage by urging Trump to both take more care in his tweets and accept the scientific consensus about man-made climate change, which Trump challenged during his campaign.

Replying to the president-elect, she tweeted: “And you’re a man with great responsibilities. May I suggest more care on Twitter and more time learning about #climatechange.”

She also tweeted data pointing out that 97.5 per cent of publishing climatologists and about 90 per cent of all publishing scientists supported the human-induced climate theory.

Overnight Majic’s Twitter followers more than doubled as she found herself thrust into the spotlight by a man who will be sworn in as president on Friday.

Majic told The Guardian that she was keen to use the attention to speak out on the environment. “I’ve got my 15 minutes of fame and this is how I’m choosing to use it,” she said.

Majic said Trump’s error was a careless mistake. “One would hope that the future president of the US would pay a little more attention, but I’m sure anybody could have made the same mistake.

"@drgoodspine: @realDonaldTrump @Ivanka Trump is great, a woman with real character and class."

@realDonaldTrump @drgoodspine And you're a man with great responsibilities. May I suggest more care on Twitter and more time learning about #climatechange. pic.twitter.com/kBMEGZYtig

“What is of more concern to me is that we have a president-elect who is a climate change denier.”

Majic said that because of her Twitter name, @Ivanka, she had often been mistaken for Ivanka Trump on the social network, but her politics were very different from the Trump family’s.

“My politics are very different from Donald Trump’s. During the election campaign I had a Twitter bot that replied to anyone who had @Ivanka and Trump in the same tweet, with the message: ‘Don’t know about you but I’m voting for Hillary.’

“The other thing I get mistaken for is a Hungarian concrete company called Ivanka Concrete, but that’s easy to deal with.

“Of course I’m worried about Donald Trump being president of the United States, but let’s hope he does a good job.”

Trump had not deleted his tweet nor acknowledged his mistake at time of writing, though Goodstein made his account private.

At the time of writing the tweet had been retweeted more than 6,500 times and favourited more than 35,000 times, with more than 10,000 replies - the vast majority of them including Majic.

A freelance digital consultant, Majic advises clients to keep a low profile when caught up in social media storms. “I am probably not doing what I would advise others to do. I would advise them to switch off their phones and go for a nice walk.

Majic’s twitter profile suggests she is not as active a user of Twitter as the president-elect, with just six tweets - most of them retweets - in the past week.

Her recent activity on Twitter was a retweet encouraging votes in Brighton’s upcoming restaurant competition and another publicising another resident’s appeal for return of her lost house keys.

Meanwhile, Ivanka Trump, who campaigned with Trump and is to move to Washington DC as her husband, Jared Kushner, becomes a senior White House adviser, seemed oblivious to the compliment paid to her by Goodstein, sharing a photo of “#datenight” with her 2.74 million followers.

Goldstein’s misdirected tweet had come during a CNN programme on the incoming first daughter featuring interviews with her adult brothers, Donald Jnr and Eric Trump, and about which their father had expressed concerns.

As president, Trump will have the option of taking over the official @POTUS Twitter handle or maintaining his own, @realDonaldTrump. With 20.1 million followers hanging on his every missive compared with @POTUS’s 13.5 million, Trump himself has given no indication he will make the switch.

Sean Spicer, the incoming White House press secretary, told CNN earlier this month that Trump would “probably be tweeting from both, or whatever he chooses”.

Last week, BuzzFeed News publicised concerns that Trump’s “shockingly insecure” personal Twitter account had no known special security protections and was open to being exploited with potentially devastating impacts for the stock market and geopolitical stability.

It would not be the first time Trump’s account has been hacked: in 2013, when he was best-known as a real estate tycoon and host of The Apprentice TV show, someone reportedly gained access to his account to tweet Lil Wayne lyrics (“These hoes think they classy, well that’s the class I’m skippen”, from the remix of will.i.am and Britney Spear’s Scream & Shout).

“My Twitter has been seriously hacked --- and we are looking for the perpetrators,” Trump tweeted at the time.